When Govt Enters The Boardroom 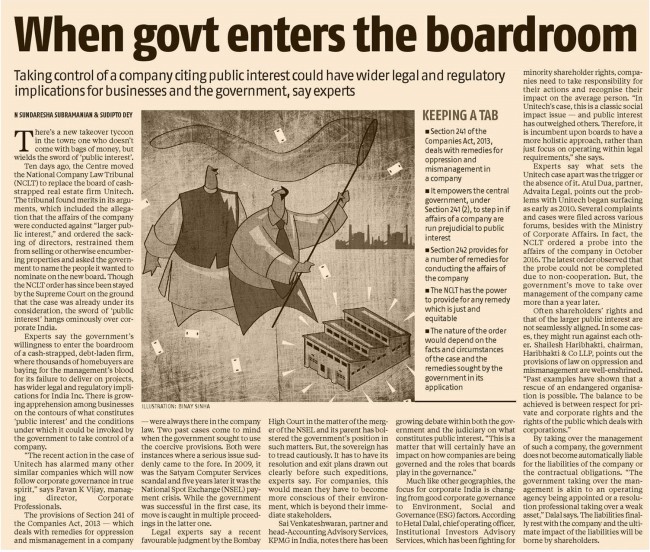 There’s a new takeover tycoon in the town; one who doesn’t come with bags of money, but wields the sword of ‘public interest’.

Ten days ago, the Centre moved the National Company Law Tribunal (NCLT) to replace the board of cashstrapped real estate firm Unitech. The tribunal found merits in its arguments, which included the allegation that the affairs of the company were conducted against “larger public interest,” and ordered the sacking of directors, restrained them from selling or otherwise encumbering properties and asked the government to name the people it wanted to nominate on the new board. Though the NCLT order has since been stayed by the Supreme Court on the ground that the case was already under its consideration, the sword of ‘public interest’ hangs ominously over corporate India.

Experts say the government’s willingness to enter the boardroom of a cash-strapped, debt-laden firm, where thousands of homebuyers are baying for the management’s blood for its failure to deliver on projects, has wider legal and regulatory implications for India Inc. There is growing apprehension among businesses on the contours of what constitutes ‘public interest’ and the conditions under which it could be invoked by the government to take control of a company.

“The recent action in the case of Unitech has alarmed many other similar companies which will now follow corporate governance in true spirit,” says Pavan K Vijay, managing director, Corporate Professionals.

The provisions of Section 241 of the Companies Act, 2013 — which deals with remedies for oppression and mismanagement in a company — were always there in the company law. Two past cases come to mind when the government sought to use the coercive provisions. Both were instances where a serious issue suddenly came to the fore. In 2009, it was the Satyam Computer Services scandal and five years later it was the National Spot Exchange (NSEL) payment crisis. While the government was successful in the first case, its move is caught in multiple proceedings in the latter one.

Legal experts say a recent favourable judgment by the Bombay High Court in the matter of the merger of the NSEL and its parent has bolstered the government’s position in such matters. But, the sovereign has to tread cautiously. It has to have its resolution and exit plans drawn out clearly before such expeditions, experts say. For companies, this would mean they have to become more conscious of their environment, which is beyond their immediate stakeholders.

Sai Venkateshwaran, partner and head-Accounting Advisory Services, KPMG in India, notes there has been growing debate within both the government and the judiciary on what constitutes public interest. “This is a matter that will certainly have an impact on how companies are being governed and the roles that boards play in the governance.”

Much like other geographies, the focus for corporate India is changing from good corporate governance to Environment, Social and Governance (ESG) factors. According to Hetal Dalal, chief operating officer, Institutional Investors Advisory Services, which has been fighting for minority shareholder rights, companies need to take responsibility for their actions and recognise their impact on the average person. “In Unitech’s case, this is a classic social impact issue — and public interest has outweighed others. Therefore, it is incumbent upon boards to have a more holistic approach, rather than just focus on operating within legal requirements,” she says.

Experts say what sets the Unitech case apart was the trigger or the absence of it. Atul Dua, partner, Advaita Legal, points out the problems with Unitech began surfacing as early as 2010. Several complaints and cases were filed across various forums, besides with the Ministry of Corporate Affairs. In fact, the NCLT ordered a probe into the affairs of the company in October 2016. The latest order observed that the probe could not be completed due to non- cooperation. But, the government’s move to take over management of the company came more than a year later.

Often shareholders’ rights and that of the larger public interest are not seamlessly aligned. In some cases, they might run against each other. Shailesh Haribhakti, chairman, Haribhakti & Co LLP, points out the provisions of law on oppression and mismanagement are well-enshrined. “Past examples have shown that a rescue of an endangered organisation is possible. The balance to be achieved is between respect for private and corporate rights and the rights of the public which deals with corporations.”