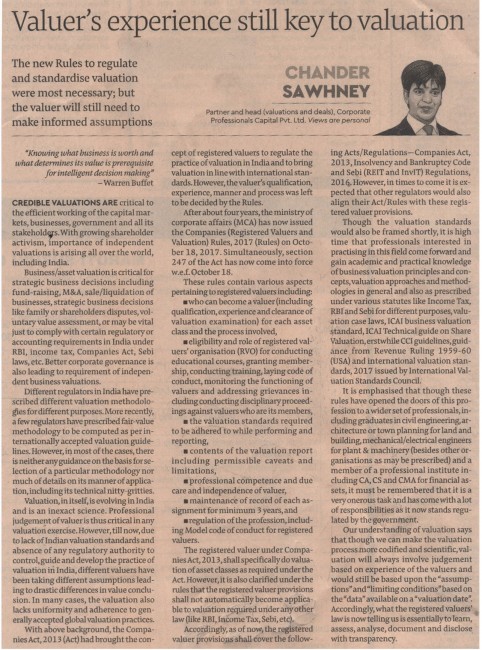 Credible valuations are critical to the efficient working of the capital markets, businesses, government and all its stakeholders. With growing shareholder activism, importance of independent valuations is arising all over the world, including India. Business/asset valuation is critical for strategic business decisions including fund-raising, M&A, sale/liquidation of businesses, strategic business decisions like family or shareholders disputes, voluntary value assessment, or may be vital just to comply with certain regulatory or accounting requirements in India under RBI, income tax, Companies Act, Sebi laws, etc. Better corporate governance is also leading to requirement of independent business valuations. Different regulators in India have prescribed different valuation methodologies for different purposes. More recently, a few regulators have prescribed fair-value methodology to be computed as per internationally accepted valuation guidelines. However, in most of the cases, there is neither any guidance on the basis for selection of a particular methodology nor much of details on its manner of application, including its technical nitty-gritties.

Valuation, in itself, is evolving in India and is an inexact science. Professional judgement of valuer is thus critical in any valuation exercise. However, till now, due to lack of Indian valuation standards and absence of any regulatory authority to control, guide and develop the practice of valuation in India, different valuers have been taking different assumptions leading to drastic differences in value conclusion. In many cases, the valuation also lacks uniformity and adherence to generally accepted global valuation practices. With above background, the Companies Act, 2013 (Act) had brought the concept of registered valuers to regulate the practice of valuation in India and to bring valuation in line with international standards. However, the valuer’s qualification, experience, manner and process was left to be decided by the Rules.

After about four years, the ministry of corporate affairs (MCA) has now issued the Companies (Registered Valuers and Valuation) Rules, 2017 (Rules) on October 18, 2017. Simultaneously, section 247 of the Act has now come into force w.e.f. October 18. These rules contain various aspects pertaining to registered valuers including:

The registered valuer under Companies Act, 2013, shall specifically do valuation of asset classes as required under the Act. However, it is also clarified under the rules that the registered valuer provisions shall not automatically become applicable to valuation required under any other law (like RBI, Income Tax, Sebi, etc). Accordingly, as of now, the registered valuer provisions shall cover the following Acts/Regulations—Companies Act, 2013, Insolvency and Bankruptcy Code and Sebi (REIT and InvIT) Regulations, 2016. However, in times to come it is expected that other regulators would also align their Act/Rules with these registered valuer provisions. Though the valuation standards would also be framed shortly, it is high time that professionals interested in practising in this field come forward and gain academic and practical knowledge of business valuation principles and concepts, valuation approaches and methodologies in general and also as prescribed under various statutes like Income Tax, RBI and Sebi for different purposes, valuation case laws, ICAI business valuation standard, ICAI Technical guide on Share Valuation, erstwhile CCI guidelines, guidance from Revenue Ruling 1959-60 (USA) and international valuation standards, 2017 issued by International Valuation Standards Council.

It is emphasised that though these rules have opened the doors of this profession to a wider set of professionals, including graduates in civil engineering, architecture or town planning for land and building, mechanical/electrical engineers for plant & machinery (besides other organisations as may be prescribed) and a member of a professional institute including CA, CS and CMA for financial assets, it must be remembered that it is a very onerous task and has come with a lot of responsibilities as it now stands regulated by the government. Our understanding of valuation says that though we can make the valuation process more codified and scientific, valuation will always involve judgement based on experience of the valuers and would still be based upon the “assumptions” and “limiting conditions” based on the “data” available on a “valuation date”. Accordingly, what the registered valuers’ law is now telling us is essentially to learn, assess, analyse, document and disclose with transparency.