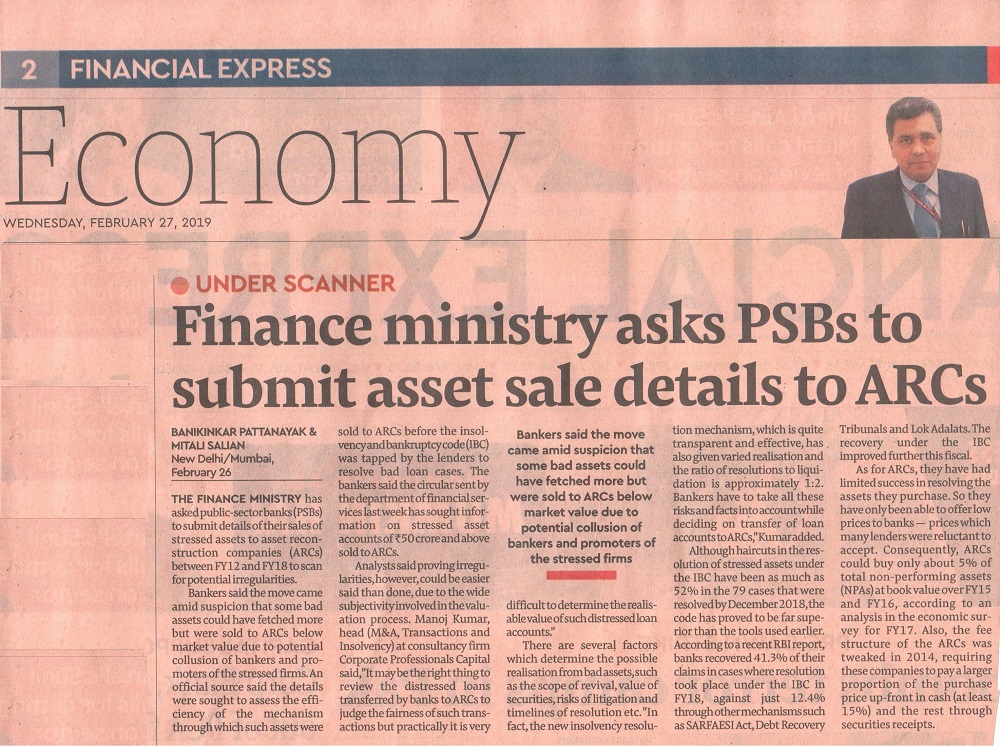 The finance ministry has asked public-sector banks (PSBs) to submit details of their sales of stressed assets to asset reconstruction companies (ARCs) between FY12 and FY18 to scan for potential irregularities.

Bankers said the move came amid suspicion that some bad assets could have fetched more but were sold to ARCs below market value due to potential collusion of bankers and promoters of the stressed firms. An official source said the details were sought to assess the efficiency of the mechanism through which such assets were sold to ARCs before the insolvency and bankruptcy code (IBC) was tapped by the lenders to resolve bad loan cases.

The bankers said the circular sent by the department of financial services last week has sought information on stressed asset accounts of Rs 50 crore and above sold to ARCs.

Analysts said proving irregularities, however, could be easier said than done, due to the wide subjectivity involved in the valuation process. Manoj Kumar, head (M&A, Transactions and Insolvency) at consultancy firm Corporate Professionals Capital said, “It may be the right thing to review the distressed loans transferred by banks to ARCs to judge the fairness of such transactions but practically it is very difficult to determine the realisable value of such distressed loan accounts.”

There are several factors which determine the possible realisation from bad assets, such as the scope of revival, value of securities, risks of litigation and timelines of resolution etc. “In fact, the new insolvency resolution mechanism, which is quite transparent and effective, has also given varied realisation and the ratio of resolutions to liquidation is approximately 1:2. Bankers have to take all these risks and facts into account while deciding on transfer of loan accounts to ARCs,” Kumar added.

Although haircuts in the resolution of stressed assets under the IBC have been as much as 52% in the 79 cases that were resolved by December 2018, the code has proved to be far superior than the tools used earlier. According to a recent RBI report, banks recovered 41.3% of their claims in cases where resolution took place under the IBC in FY18, against just 12.4% through other mechanisms such as SARFAESI Act, Debt Recovery Tribunals and Lok Adalats. The recovery under the IBC improved further this fiscal.