Tweaks in Insolvency and Bankruptcy Code to block wilful defaulters 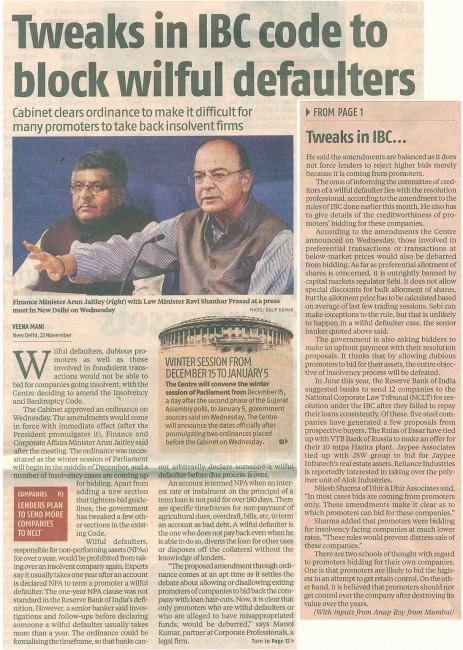 Wilful defaulters, dubious promoters as well as those involved in fraudulent transactions would not be able to bid for companies going insolvent, with the Centre deciding to amend the Insolvency and Bankruptcy Code.

The Cabinet approved an ordinance on Wednesday. The amendments would come in force with immediate effect (after the President promulgates it), Finance and Corporate Affairs Minister Arun Jaitley said after the meeting. The ordinance was necessitated as the winter session of Parliament will begin in the middle of December, and a number of insolvency cases are coming up for bidding. Apart from adding a new section that tightens bid guidelines, the government has tweaked a few other sections in the existing Code.

An account is termed NPA when an interest rate or instalment on the principal of a term loan is not paid for over 180 days. There are specific timeframes for non-payment of agricultural dues, overdraft, bills, etc, to term an account as bad debt. A wilful defaulter is the one who does not pay back even when he is able to do so, diverts the loan for other uses or disposes off the collateral without the knowledge of lenders.

“The proposed amendment through ordinance comes at an apt time as it settles the debate about allowing or disallowing exiting promoters of companies to bid back the company with loan hair-cuts. Now, it is clear that only promoters who are wilful defaulters or who are alleged to have misappropriated funds, would be debarred,” says Manoj Kumar, partner at Corporate Professionals, a legal firm.

He said the amendments are balanced as it does not force lenders to reject higher bids merely because it is coming from promoters.

The onus of informing the committee of creditors of a wilful defaulter lies with the resolution professional, according to the amendment to the rules of IBC done earlier this month. He also has to give details of the creditworthiness of promoters’ bidding for these companies.

According to the amendments the Centre announced on Wednesday, those involved in preferential transactions or transactions at below-market prices would also be debarred from bidding. As far as preferential allotment of shares is concerned, it is outrightly banned by capital markets regulator Sebi. It does not allow special discounts for bulk allotment of shares, but the allotment price has to be calculated based on average of last few trading sessions. Sebi can make exceptions to the rule, but that is unlikely to happen in a wilful defaulter case, the senior banker quoted above said.

The government is also asking bidders to make an upfront payment with their resolution proposals. It thinks that by allowing dubious promoters to bid for their assets, the entire objective of insolvency process will be defeated.

In June this year, the Reserve Bank of India suggested banks to send 12 companies to the National Corporate Law Tribunal (NCLT) for resolution under the IBC after they failed to repay their loans consistently. Of these, five steel companies have generated a few proposals from prospective buyers. The Ruias of Essar have tied up with VTB Bank of Russia to make an offer for their 10 mtpa Hazira plant. Jaypee Associates tied up with JSW group to bid for Jaypee Infratech’s real estate assets. Reliance Industries is reportedly interested in taking over the polymer unit of Alok Industries.

Nilesh Sharma of Dhir & Dhir Associates said, “In most cases bids are coming from promoters only. These amendments make it clear as to which promoters can bid for these companies.”

Sharma added that promoters were bidding for insolvency facing companies at much lower rates. “These rules would prevent distress sale of these companies.”

There are two schools of thought with regard to promoters bidding for their own companies. One is that promoters are likely to bid the highest in an attempt to get retain control. On the other hand, it is believed that promoters should not get control over the company after destroying its value over the years.