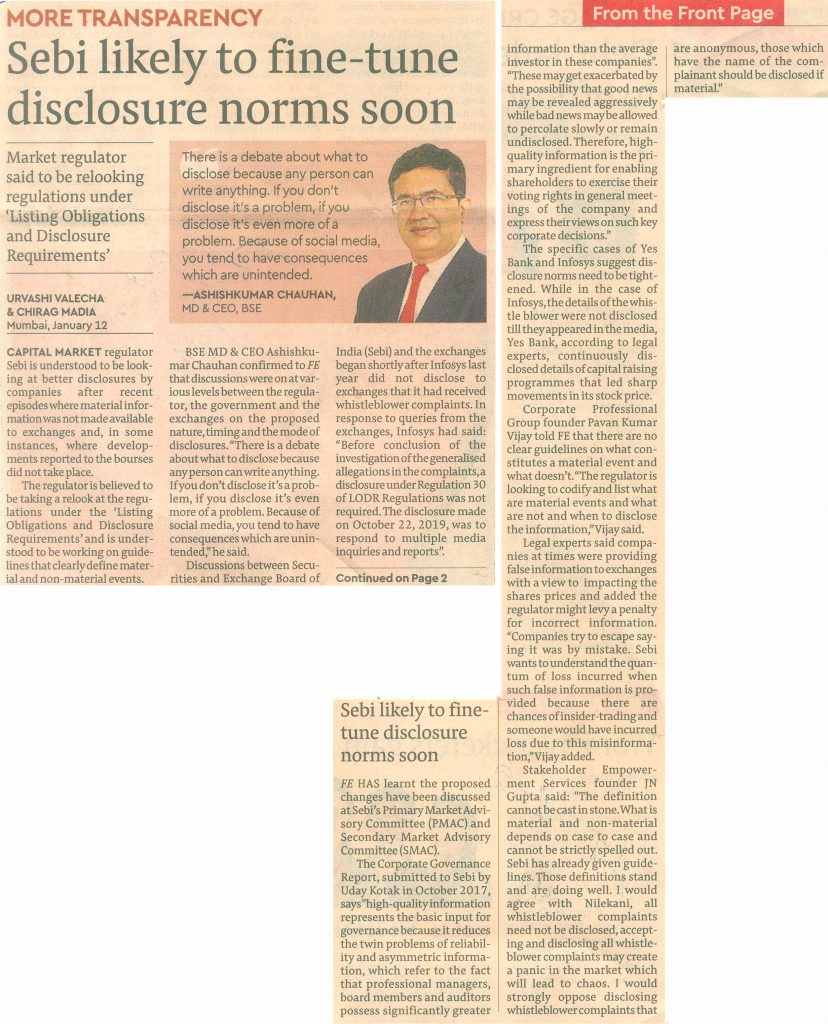 The regulator is believed to be taking a relook at the regulations under the ‘Listing Obligations and Disclosure Requirements’ and is understood to be working on guidelines that clearly define material and non-material events.

BSE MD & CEO Ashishkumar Chauhan confirmed to FE that discussions were on at various levels between the regulator, the government and the exchanges on the proposed nature, timing and the mode of disclosures. “There is a debate about what to disclose because any person can write anything. If you don’t disclose it’s a problem, if you disclose it’s even more of a problem. Because of social media, you tend to have consequences which are unintended,” he said.

Discussions between Securities and Exchange Board of India (Sebi) and the exchanges began shortly after Infosys last year did not disclose to exchanges that it had received whistleblower complaints. In response to queries from the exchanges, Infosys had said: “Before conclusion of the investigation of the generalised allegations in the complaints, a disclosure under Regulation 30 of LODR Regulations was not required. The disclosure made on October 22, 2019, was to respond to multiple media inquiries and reports”.

The Corporate Governance Report, submitted to Sebi by Uday Kotak in October 2017, says “high-quality information represents the basic input for governance because it reduces the twin problems of reliability and asymmetric information, which refer to the fact that professional managers, board members and auditors possess significantly greater information than the average investor in these companies”. “These may get exacerbated by the possibility that good news may be revealed aggressively while bad news may be allowed to percolate slowly or remain undisclosed. Therefore, high-quality information is the primary ingredient for enabling shareholders to exercise their voting rights in general meetings of the company and express their views on such key corporate decisions.”

The specific cases of Yes Bank and Infosys suggest disclosure norms need to be tightened. While in the case of Infosys, the details of the whistle blower were not disclosed till they appeared in the media, Yes Bank, according to legal experts, continuously disclosed details of capital raising programmes that led sharp movements in its stock price.

Corporate Professional Group founder Pavan Kumar Vijay told FE that there are no clear guidelines on what constitutes a material event and what doesn’t. “The regulator is looking to codify and list what are material events and what are not and when to disclose the information,” Vijay said.

Legal experts said companies at times were providing false information to exchanges with a view to impacting the shares prices and added the regulator might levy a penalty for incorrect information. “Companies try to escape saying it was by mistake. Sebi wants to understand the quantum of loss incurred when such false information is provided because there are chances of insider-trading and someone would have incurred loss due to this misinformation,” Vijay added.