The unmaking of shell companies 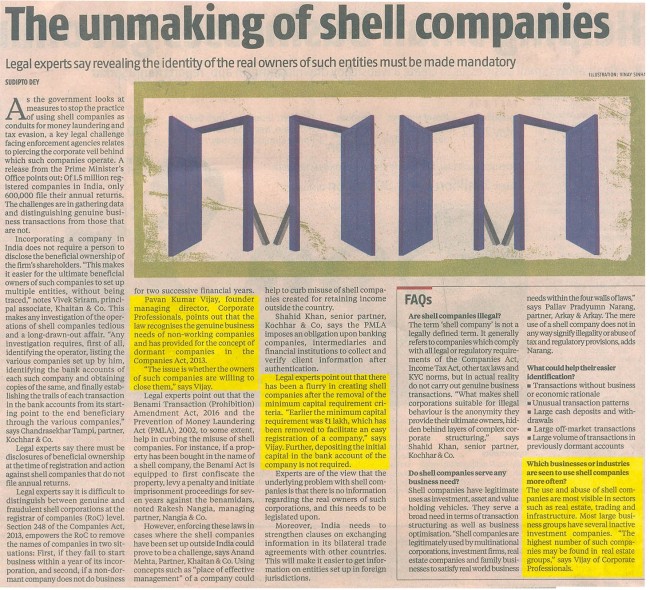 As the government looks at measures to stop the practice of using shell companies as conduits for money laundering and tax evasion, a key legal challenge facing enforcement agencies relates to piercing the corporate veil behind which such companies operate. A release from the Prime Minister’s Office points out: Of 1.5 million registered companies in India, only 600,000 file their annual returns. The challenges are in gathering data and distinguishing genuine business transactions from those that are not.

Incorporating a company in India does not require a person to disclose the beneficial ownership of the firm’s shareholders. “This makes it easier for the ultimate beneficial owners of such companies to set up multiple entities, without being traced,” notes Vivek Sriram, principal associate, Khaitan & Co. This makes any investigation of the operations of shell companies tedious and a long-drawn-out affair. “Any investigation requires, first of all, identifying the operator, listing the various companies set up by him, identifying the bank accounts of each such company and obtaining copies of the same, and finally establishing the trails of each transaction in the bank accounts from its starting point to the end beneficiary through the various companies,” says Chandrasekhar Tampi, partner, Kochhar & Co.

Legal experts say there must be disclosures of beneficial ownership at the time of registration and action against shell companies that do not file annual returns.

Legal experts say it is difficult to distinguish between genuine and fraudulent shell corporations at the registrar of companies (RoC) level. Section 248 of the Companies Act, 2013, empowers the RoC to remove the names of companies in two situations: First, if they fail to start business within a year of its incorporation, and second, if a non-dormant company does not do business for two successive financial years.

Pavan Kumar Vijay, founder managing director, Corporate Professionals, points out that the law recognises the genuine business needs of non-working companies and has provided for the concept of dormant companies in the Companies Act, 2013.

“The issue is whether the owners of such companies are willing to close them,” says Vijay.

Legal experts point out that the Benami Transaction (Prohibition) Amendment Act, 2016 and the Prevention of Money Laundering Act (PMLA), 2002, to some extent, help in curbing the misuse of shell companies. For instance, if a property has been bought in the name of a shell company, the Benami Act is equipped to first confiscate the property, levy a penalty and initiate imprisonment proceedings for seven years against the benamidars, noted Rakesh Nangia, managing partner, Nangia & Co.

However, enforcing these laws in cases where the shell companies have been set up outside India could prove to be a challenge, says Anand Mehta, Partner, Khaitan & Co. Using concepts such as “place of effective management” of a company could help to curb misuse of shell companies created for retaining income outside the country.

Legal experts point out that there has been a flurry in creating shell companies after the removal of the minimum capital requirement criteria. “Earlier the minimum capital requirement was ~1 lakh, which has been removed to facilitate an easy registration of a company,” says Vijay. Further, depositing the initial capital in the bank account of the company is not required.

Experts are of the view that the underlying problem with shell companies is that there is no information regarding the real owners of such corporations, and this needs to be legislated upon.

Moreover, India needs to strengthen clauses on exchanging information in its bilateral trade agreements with other countries. This will make it easier to get information on entities set up in foreign jurisdictions.