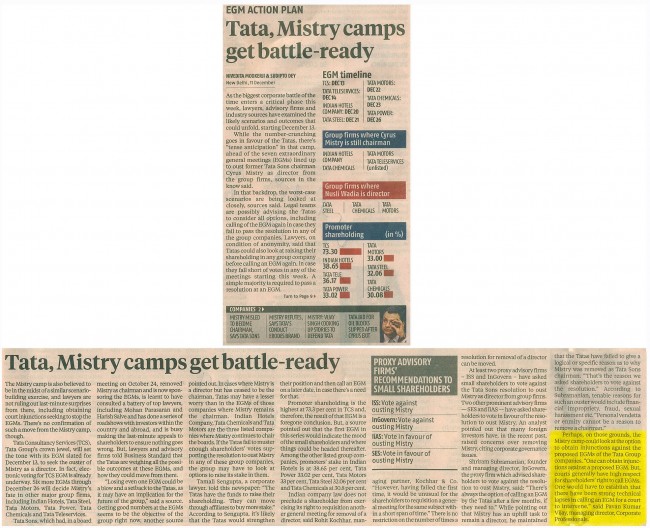 As the biggest corporate battle of the time enters a critical phase this week, lawyers, advisory firms and industry sources have examined the likely scenarios and outcomes that could unfold, starting December 13.

While the number-crunching goes in favour of the Tatas, there’s “tense anticipation” in that camp, ahead of the seven extraordinary general meetings (EGMs) lined up to oust former Tata Sons chairman Cyrus Mistry as director from the group firms, sources in the know said.

In that backdrop, the worst-case scenarios are being looked at closely, sources said. Legal teams are possibly advising the Tatas to consider all options, including calling of the EGM again in case they fail to pass the resolution in any of the group companies. Lawyers, on condition of anonymity, said that Tatas could also look at raising their shareholding in any group company before calling an EGM again, in case they fall short of votes in any of the meetings starting this week. A simple majority is required to pass a resolution at an EGM.

The Mistry camp is also believed to be in the midst of a similar scenario building exercise, and lawyers are not ruling out last-minute surprises from there, including obtaining court injunctions seeking to stop the EGMs. There’s no confirmation of such a move from the Mistry camp, though.

Tata Sons, which had, in a board meeting on October 24, removed Mistry as chairman and is now sponsoring the EGMs, is learnt to have consulted a battery of top lawyers, including Mohan Parasaran and Harish Salve and has done a series of roadshows with investors within the country and abroad, and is busy making the last-minute appeals to shareholders to ensure nothing goes wrong. But, lawyers and advisory firms told Business Standard that the Tatas are weighing all the possible outcomes at these EGMs, and how they could move from there.

“Losing even one EGM could be a blow and a setback to the Tatas, as it may have an implication for the future of the group,” said a source. Getting good numbers at the EGMs seems to be the objective of the group right now, another source pointed out. In cases where Mistry is a director but has ceased to be the chairman, Tatas may have a lesser worry than in the EGMs of those companies where Mistry remains the chairman. Indian Hotels Company, Tata Chemicals and Tata Motors are the three listed companies where Mistry continues to chair the boards. If the Tatas fail to muster enough shareholders’ votes supporting the resolution to oust Mistry in any of these group companies, the group may have to look at options to raise its stake in them.

Tamali Sengupta, a corporate lawyer, told this newspaper: “The Tatas have the funds to raise their shareholding. They can move through affiliates to buy more stake.” According to Sengupta, it’s likely that the Tatas would strengthen their position and then call an EGM on a later date, in case there’s a need for that.

Promoter shareholding is the highest at 73.3 per cent in TCS and, therefore, the result of that EGM is a foregone conclusion. But, a source pointed out that the first EGM in this series would indicate the mood of the small shareholders and where things could be headed thereafter. Among the other listed group companies, promoters’ stake in Indian Hotels is at 38.65 per cent, Tata Power 33.02 per cent, Tata Motors 33 per cent, Tata Steel 32.06 per cent and Tata Chemicals at 30.8 per cent.

In Govern: Vote against ousting

Indian company law does not preclude a shareholder from exercising its right to requisition another general meeting for removal of a director, said Rohit Kochhar, managing partner, Kochhar & Co. “However, having failed the first time, it would be unusual for the shareholders to requisition a general meeting for the same subject within a short span of time.” There is no restriction on the number of times a resolution for removal of a director can be moved.

At least two proxy advisory firms – ISS and In Govern – have asked small shareholders to vote against the Tata Sons resolution to oust Mistry as director from group firms. Two other prominent advisory firms — SES and IIAS — have asked shareholders to vote in favour of the resolution to oust Mistry. An analyst pointed out that many foreign investors have, in the recent past, raised concerns over removing Mistry, citing corporate governance issues.

Shriram Subramanian, founder and managing director, In Govern, the proxy firm which advised shareholders to vote against the resolution to oust Mistry, said: “There’s always the option of calling an EGM by the Tatas after a few months, if they need to.” While pointing out that Mistry has an uphill task to remain a director, he maintained that the Tatas have failed to give a logical or specific reason as to why Mistry was removed as Tata Sons chairman. “That’s the reason we asked shareholders to vote against the resolution.” According to Subramanian, tenable reasons for such an ouster would include financial impropriety, fraud, sexual harassment etc. “Personal vendetta or enmity cannot be a reason to remove a chairman.”

Perhaps, on those grounds, the Mistry camp could look at the option to obtain injunctions against the proposed EGMs of the Tata Group companies. “One can obtain injunctions against a proposed EGM. But, courts generally have high respect for shareholders’ right to call EGMs. One would have to establish that there have been strong technical lapses in calling an EGM for a court to intervene,” said Pavan Kumar Vijay, managing director, Corporate Professionals.