Takeover blues at the leadership level 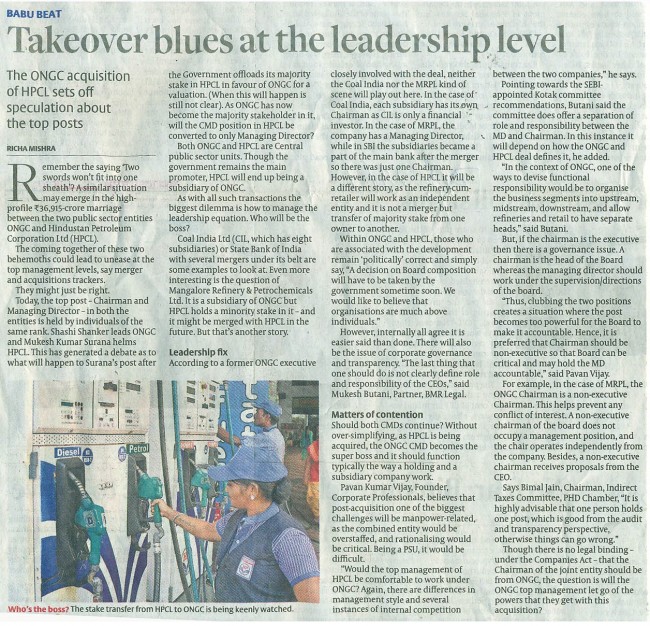 Remember the saying ‘Two swords won’t fit into one sheath’? A similar situation may emerge in the high-profile ?36,915-crore marriage between the two public sector entities ONGC and Hindustan Petroleum Corporation Ltd (HPCL).

The coming together of these two behemoths could lead to unease at the top management levels, say merger and acquisitions trackers.

Today, the top post – Chairman and Managing Director – in both the entities is held by individuals of the same rank. Shashi Shanker leads ONGC and Mukesh Kumar Surana helms HPCL. This has generated a debate as to what will happen to Surana’s post after the Government offloads its majority stake in HPCL in favour of ONGC for a valuation. (When this will happen is still not clear). As ONGC has now become the majority stakeholder in it, will the CMD position in HPCL be converted to only Managing Director?

Both ONGC and HPCL are Central public sector units. Though the government remains the main promoter, HPCL will end up being a subsidiary of ONGC.

As with all such transactions the biggest dilemma is how to manage the leadership equation. Who will be the boss?

Coal India Ltd (CIL, which has eight subsidiaries) or State Bank of India with several mergers under its belt are some examples to look at. Even more interesting is the question of Mangalore Refinery & Petrochemicals Ltd. It is a subsidiary of ONGC but HPCL holds a minority stake in it – and it might be merged with HPCL in the future. But that’s another story.

According to a former ONGC executive closely involved with the deal, neither the Coal India nor the MRPL kind of scene will play out here. In the case of Coal India, each subsidiary has its own Chairman as CIL is only a financial investor. In the case of MRPL, the company has a Managing Director, while in SBI the subsidiaries became a part of the main bank after the merger so there was just one Chairman. However, in the case of HPCL it will be a different story, as the refinery-cum-retailer will work as an independent entity and it is not a merger but transfer of majority stake from one owner to another.

Within ONGC and HPCL, those who are associated with the development remain ‘politically’ correct and simply say, “A decision on Board composition will have to be taken by the government sometime soon. We would like to believe that organisations are much above individuals.”

However, internally all agree it is easier said than done. There will also be the issue of corporate governance and transparency. “The last thing that one should do is not clearly define role and responsibility of the CEOs,” said Mukesh Butani, Partner, BMR Legal.

Should both CMDs continue? Without over-simplifying, as HPCL is being acquired, the ONGC CMD becomes the super boss and it should function typically the way a holding and a subsidiary company work.

Pavan Kumar Vijay, Founder, Corporate Professionals, believes that post-acquisition one of the biggest challenges will be manpower-related, as the combined entity would be overstaffed, and rationalising would be critical. Being a PSU, it would be difficult.

“Would the top management of HPCL be comfortable to work under ONGC? Again, there are differences in management style and several instances of internal competition between the two companies,” he says.

Pointing towards the SEBI-appointed Kotak committee recommendations, Butani said the committee does offer a separation of role and responsibility between the MD and Chairman. In this instance it will depend on how the ONGC and HPCL deal defines it, he added.

“In the context of ONGC, one of the ways to devise functional responsibility would be to organise the business segments into upstream, midstream, downstream, and allow refineries and retail to have separate heads,” said Butani.

But, if the chairman is the executive then there is a governance issue. A chairman is the head of the Board whereas the managing director should work under the supervision/directions of the board.

“Thus, clubbing the two positions creates a situation where the post becomes too powerful for the Board to make it accountable. Hence, it is preferred that Chairman should be non-executive so that Board can be critical and may hold the MD accountable,” said Pavan Vijay.

Says Bimal Jain, Chairman, Indirect Taxes Committee, PHD Chamber, “It is highly advisable that one person holds one post, which is good from the audit and transparency perspective, otherwise things can go wrong.”

Though there is no legal binding – under the Companies Act – that the Chairman of the joint entity should be from ONGC, the question is will the ONGC top management let go of the powers that they get with this acquisition?