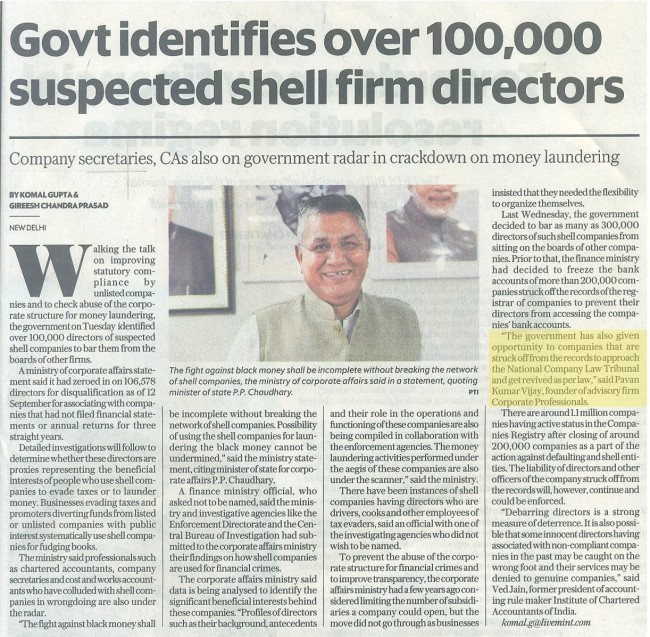 Walking the talk on improving statutory compliance by unlisted companies and to check abuse of the corporate structure for money laundering, the government on Tuesday identified over 100,000 directors of suspected shell companies to bar them from the boards of other firms.

A ministry of corporate affairs statement said it had zeroed in on 106,578 directors for disqualification as of 12 September for associating with companies that had not filed financial statements or annual returns for three straight years.

Detailed investigations will follow to determine whether these directors are proxies representing the beneficial interests of people who use shell companies to evade taxes or to launder money. Businesses evading taxes and promoters diverting funds from listed or unlisted companies with public interest systematically use shell companies for fudging books.

The ministry said professionals such as chartered accountants, company secretaries and cost and works accountants who have colluded with shell companies in wrongdoing are also under the radar.

“The fight against black money shall be incomplete without breaking the network of shell companies. Possibility of using the shell companies for laundering the black money cannot be undermined,” said the ministry statement, citing minister of state for corporate affairs PP Chaudhary.

A finance ministry official, who asked not to be named, said the ministry and investigative agencies like the Enforcement Directorate and the Central Bureau of Investigation had submitted to the corporate affairs ministry their findings on how shell companies are used for financial crimes.

There have been instances of shell companies having directors who are drivers, cooks and other employees of tax evaders, said an official with one of the investigating agencies who did not wish to be named.

To prevent the abuse of the corporate structure for financial crimes and to improve transparency, the corporate affairs ministry had a few years ago considered limiting the number of subsidiaries a company could open, but the move did not go through as businesses insisted that they needed the flexibility to organise themselves.

Last Wednesday, the government decided to bar as many as 300,000 directors of such shell companies from sitting on the boards of other companies. Prior to that, the finance ministry had decided to freeze the bank accounts of more than 200,000 companies struck off the records of the registrar of companies to prevent their directors from accessing the companies’ bank accounts.

“The government has also given opportunity to companies that are struck off from the records to approach the National Company Law Tribunal and get revived as per law,” said Pavan Kumar Vijay, founder of advisory firm Corporate Professionals.

There are around 1.1 million companies having active status in the Companies Registry after closing of around 200,000 companies as a part of the action against defaulting and shell entities. The liability of directors and other officers of the company struck off from the records will, however, continue and could be enforced.

“Debarring directors is a strong measure of deterrence. It is also possible that some innocent directors having associated with non-compliant companies in the past may be caught on the wrong foot and their services may be denied to genuine companies,” said Ved Jain, former president of accounting rule maker Institute of Chartered Accountants of India.