Rule on subsidiaries may limit operational flexibility of firms 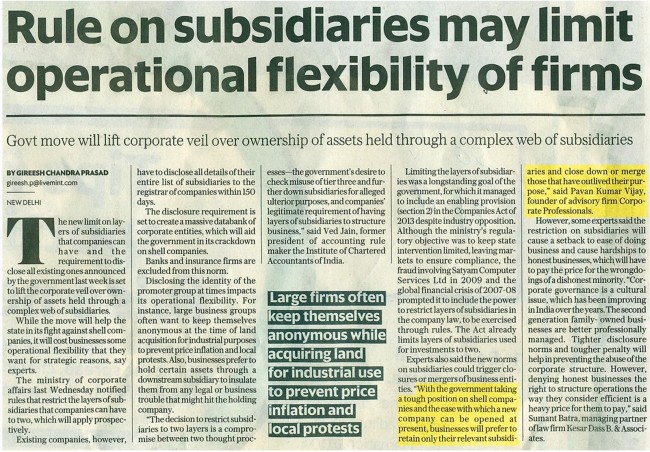 The new limit on layers of subsidiaries that companies can have and the requirement to disclose all existing ones announced by the government last week is set to lift the corporate veil over ownership of assets held through a complex web of subsidiaries.

While the move will help the state in its fight against shell companies, it will cost businesses some operational flexibility that they want for strategic reasons, say experts.

The ministry of corporate affairs last Wednesday notified rules that restrict the layers of subsidiaries that companies can have to two, which will apply prospectively.

Existing companies, however, have to disclose all details of their entire list of subsidiaries to the registrar of companies within 150 days.

The disclosure requirement is set to create a massive databank of corporate entities, which will aid the government in its crackdown on shell companies.

Banks and insurance firms are excluded from this norm.

Disclosing the identity of the promoter group at times impacts its operational flexibility. For instance, large business groups often want to keep themselves anonymous at the time of land acquisition for industrial purposes to prevent price inflation and local protests. Also, businesses prefer to hold certain assets through a downstream subsidiary to insulate them from any legal or business trouble that might hit the holding company.

“The decision to restrict subsidiaries to two layers is a compromise between two thought processes—the government’s desire to check misuse of tier three and further down subsidiaries for alleged ulterior purposes, and companies’ legitimate requirement of having layers of subsidiaries to structure business,” said Ved Jain, former president of accounting rule maker the Institute of Chartered Accountants of India.

Limiting the layers of subsidiaries was a longstanding goal of the government, for which it managed to include an enabling provision (section 2) in the Companies Act of 2013 despite industry opposition. Although the ministry’s regulatory objective was to keep state intervention limited, leaving markets to ensure compliance, the fraud involving Satyam Computer Services Ltd in 2009 and the global financial crisis of 2007-08 prompted it to include the power to restrict layers of subsidiaries in the company law, to be exercised through rules. The Act already limits layers of subsidiaries used for investments to two.

Experts also said the new norms on subsidiaries could trigger closures or mergers of business entities. “With the government taking a tough position on shell companies and the ease with which a new company can be opened at present, businesses will prefer to retain only their relevant subsidiaries and close down or merge those that have outlived their purpose,” said Pavan Kumar Vijay, founder of advisory firm Corporate Professionals.

However, some experts said the restriction on subsidiaries will cause a setback to ease of doing business and cause hardships to honest businesses, which will have to pay the price for the wrongdoings of a dishonest minority. “Corporate governance is a cultural issue, which has been improving in India over the years. The second generation family- owned businesses are better professionally managed. Tighter disclosure norms and tougher penalty will help in preventing the abuse of the corporate structure. However, denying honest businesses the right to structure operations the way they consider efficient is a heavy price for them to pay,” said Sumant Batra, managing partner of law firm Kesar Dass B. & Associates.