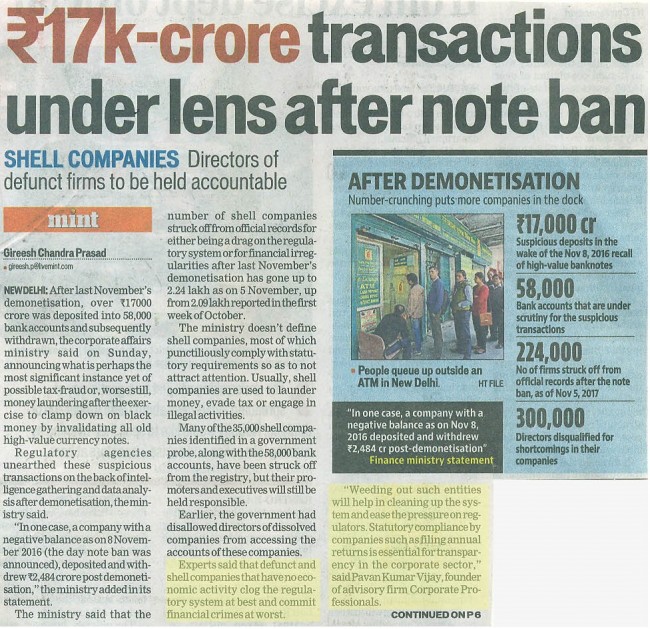 The sum, equivalent to the money set aside in the Union budget for imparting skills, generating employment and providing livelihood, has been identified following a preliminary probe into 35,000 companies and 58,000 bank accounts, the ministry said in a statement on Sunday.

The investigation revealed that Rs17,000 crore was deposited into these bank accounts and withdrawn after demonetisation was announced on 8 November.

“In one case, a company with a negative balance as on 8 November 2016 (the day demonetisation was announced), deposited and withdrew Rs2,484 crore, post-demonetisation,” said the statement.

The government is trying to identify instances of money laundering by shell companies and is seeking help from state authorities to prevent transfer of properties belonging to these companies, some of which have been deregistered for failing to comply with regulatory requirements.

Experts say that shell companies that have no economic activity clog the regulatory system and that misusing them for financial crimes aggravates the threat that they pose to the system.

“Weeding out such entities will help in cleaning up the system and ease the pressure on regulators,” said Pavan Kumar Vijay, founder of advisory firm Corporate Professionals. “Statutory compliance by companies such as filing annual returns is essential for transparency in the corporate sector.”

The corporate affairs ministry said that the number of shell companies struck off from official records for either being a drag on the regulatory system or for financial irregularities after demonetisation has risen to 224,000 as on 5 November from 209,000 reported in the first week of October.

Although the shell companies are struck off from the registry, liability for any offence committed will still rest with the officers responsible for statutory compliance and with promoters.

Earlier, the government had blocked directors of dissolved companies from accessing the bank accounts of these companies. More than 300,000 directors have been disqualified because the companies they were part of did not comply with the statutory requirement of filing annual returns.

The abuse of corporate structure has been identified by various panels that have looked into the menace of unaccounted wealth in the economy as a “standard operating procedure” by tax evaders.

Shell companies are also used for fictitious transactions aimed at inflating expenses by larger companies as well as by promoters of companies with large public interest to divert funds to privately held entities.

In the third week of September, the ministry curtailed the flexibility available to businesses to form an unlimited number of operating subsidiaries, which had opened up the possibility of concealing beneficial ownership in firms. The restriction on the layers of subsidiaries that companies can have to two applies prospectively, while existing companies have to disclose details of their entire list of subsidiaries to the Registrar of Companies within 150 days.

To make the regulatory oversight over businesses more stringent, senior officials of the Serious Fraud Investigation Office, a multi-disciplinary body attached to the corporate affairs ministry, have been authorized to make arrests for certain company law violations. The corporate affairs ministry has also asked the finance ministry to categorize these as offences under the Prevention of Money Laundering Act.