RCom lenders likely to claim up to Rs 90,000 crore 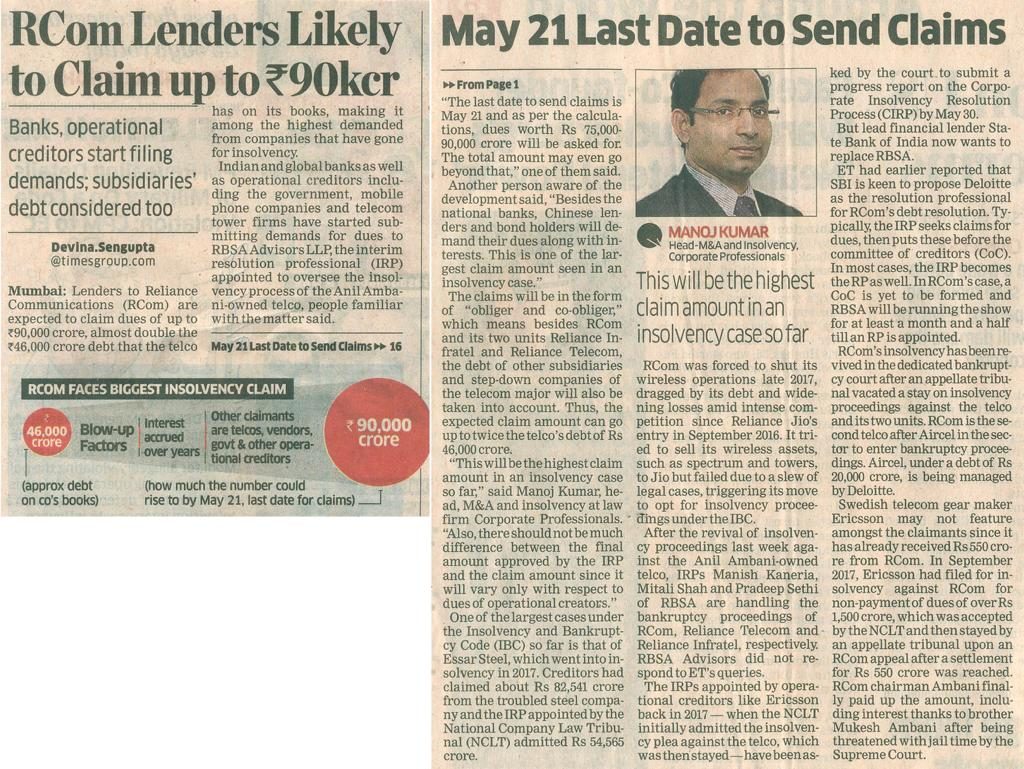 Lenders to Reliance Communications (RCom) are expected to claim dues of up to Rs 90,000 crore, almost double the Rs 46,000 crore debt that the telco has on its books, making it among the highest demanded from companies that have gone for insolvency.

Indian and global banks as well as operational creditors including the government, mobile phone companies and telecom tower firms have started submitting demands for dues to RBSA Advisors LLP, the interim resolution professional (IRP) appointed to oversee the insolvency process of the Anil Ambani-owned telco, people familiar with the matter said.

May 21 Last Date to Send Claims

Another person aware of the development said, “Besides the national banks, Chinese lenders and bond holders will demand their dues along with interests. This is one of the largest claim amount seen in an insolvency case.”

The claims will be in the form of “obliger and co-obliger,” which means besides RCom and its two units Reliance Infratel and Reliance Telecom, the debt of other subsidiaries and step-down companies of the telecom major will also be taken into account. Thus, the expected claim amount can go up to twice the telco’s debt of Rs 46,000 crore.

“This will be the highest claim amount in an insolvency case so far,” said Manoj Kumar, head, M&A and insolvency at law firm Corporate Professionals. “Also, there should not be much difference between the final amount approved by the IRP and the claim amount since it will vary only with respect to dues of operational creators.”

One of the largest cases under the Insolvency and Bankruptcy Code (IBC) so far is that of Essar Steel, which went into insolvency in 2017. Creditors had claimed about Rs 82,541 crore from the troubled steel company and the IRP appointed by the National Company Law Tribunal (NCLT) admitted Rs 54,565 crore.

RCom was forced to shut its wireless operations late 2017, dragged by its debt and widening losses amid intense competition since Reliance Jio’s entry in September 2016. It tried to sell its wireless assets, such as spectrum and towers, to Jio but failed due to a slew of legal cases, triggering its move to opt for insolvency proceedings under the IBC.