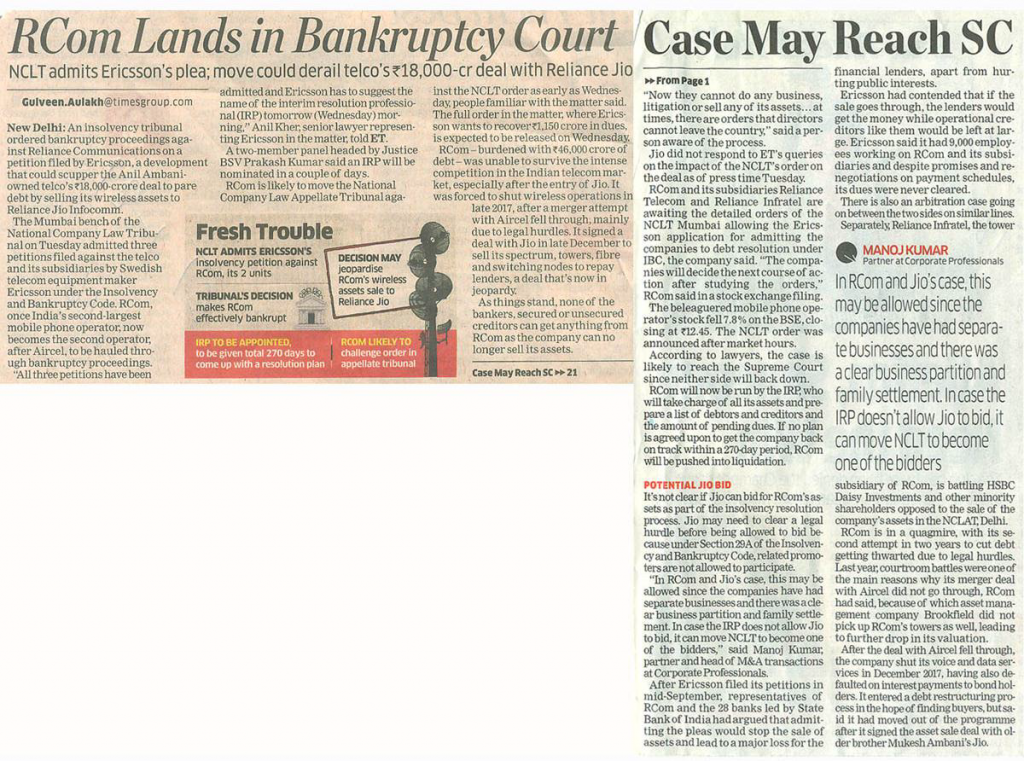 An insolvency tribunal ordered bankruptcy proceedings against Reliance Communications on a petition filed by Ericsson, a development that could scupper the Anil Ambaniowned telco’s .₹ 18,000-crore deal to pare debt by selling its wireless assets to Reliance Jio Infocomm. The Mumbai bench of the National Company Law Tribunal on Tuesday admitted three petitions filed against the telco and its subsidiaries by Swedish telecom equipment maker Ericsson under the Insolvency and Bankruptcy Code. RCom, once India’s second-largest mobile phone operator, now becomes the second operator, after Aircel, to be hauled through bankruptcy proceedings.

“All three petitions have been admitted and Ericsson has to suggest the name of the interim resolution professional (IRP) tomorrow (Wednesday) morning,” Anil Kher, senior lawyer representing Ericsson in the matter, told ET. A two-member panel headed by Justice BSV Prakash Kumar said an IRP will be nominated in a couple of days.

makes RCom effectively bankrupt jeopardise RCom’s wireless assets sale to Reliance Jio inst the NCLT order as early as Wednesday, people familiar with the matter said. The full order in the matter, where Ericsson wants to recover .₹ 1,150 crore in dues, is expected to be released on Wednesday.

RCom – burdened with .₹ 46,000 crore of debt – was unable to survive the intense competition in the Indian telecom market, especially after the entry of Jio. It was forced to shut wireless operations in late 2017, after a merger attempt with Aircel fell through, mainly due to legal hurdles. It signed a deal with Jio in late December to sell its spectrum, towers, fibre and switching nodes to repay lenders, a deal that’s now in jeopardy.

As things stand, none of the bankers, secured or unsecured creditors can get anything from RCom as the company can no longer sell its assets.

TRIBUNAL’S DECISION IRP TO BE APPOINTED, to be given total 270 days to come up with a resolution plan

“Now they cannot do any business, litigation or sell any of its assets… at times, there are orders that directors cannot leave the country,” said a person aware of the process.

Jio did not respond to ET’s queries on the impact of the NCLT’s order on the deal as of press time Tuesday.

RCom and its subsidiaries Reliance Telecom and Reliance Infratel are awaiting the detailed orders of the NCLT Mumbai allowing the Ericsson application for admitting the companies to debt resolution under IBC, the company said. “The companies will decide the next course of action after studying the orders,” RCom said in a stock exchange filing.

The beleaguered mobile phone operator’s stock fell 7.8% on the BSE, closing at .₹ 12.45. The NCLT order was announced after market hours.

According to lawyers, the case is likely to reach the Supreme Court since neither side will back down. RCom will now be run by the IRP, who will take charge of all its assets and prepare a list of debtors and creditors and the amount of pending dues. If no plan is agreed upon to get the company back on track within a 270-day period, RCom will be pushed into liquidation. It’s not clear if Jio can bid for RCom’s assets as part of the insolvency resolution process. Jio may need to clear a legal hurdle before being allowed to bid because under Section 29A of the Insolvency and Bankruptcy Code, related promoters are not allowed to participate.

“In RCom and Jio’s case, this may be allowed since the companies have had separate businesses and there was a clear business partition and family settlement. In case the IRP does not allow Jio to bid, it can move NCLT to become one of the bidders,” said Manoj Kumar, partner and head of M&A transactions at Corporate Professionals.

After Ericsson filed its petitions in mid-September, representatives of RCom and the 28 banks led by State Bank of India had argued that admitting the pleas would stop the sale of assets and lead to a major loss for the financial lenders, apart from hurting public interests.

Ericsson had contended that if the sale goes through, the lenders would get the money while operational creditors like them would be left at large. Ericsson said it had 9,000 employees working on RCom and its sub- sidiaries and despite promises and renegotiations on payment schedules, its dues were never cleared.

There is also an arbitration case going on between the two sides on similar lines. Separately, Reliance Infratel, the tower subsidiary of RCom, is battling HSBC Daisy Investments and other minority shareholders opposed to the sale of the company’s assets in the NCLAT, Delhi.

RCom is in a quagmire, with its second attempt in two years to cut debt getting thwarted due to legal hurdles. Last year, courtroom battles were one of the main reasons why its merger deal with Aircel did not go through, RCom had said, because of which asset management company Brookfield did not pick up RCom’s towers as well, leading to further drop in its valuation.

After the deal with Aircel fell through, RCom shut its voice and data services in December 2017, having also defaulted on interest payments to bond holders. It entered a debt restructuring process in the hope of finding buyers, but said it had moved out of the programme after it signed the asset sale deal with older brother Mukesh Ambani’s Jio.

MANOJ KUMAR Partner at Corporate Professionals In RCom and Jio’s case, this may be allowed since the companies have had separate businesses and there was a clear business partition and family settlement. In case the IRP doesn’t allow Jio to bid, it can move NCLT to become one of the bidders