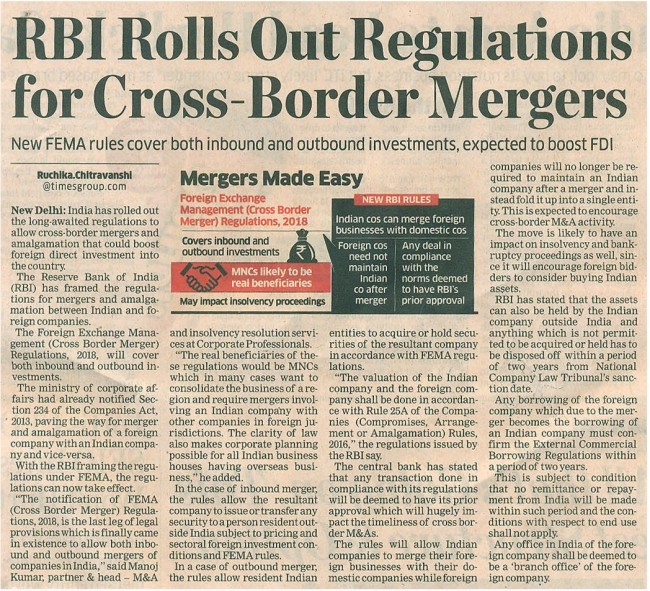 India has rolled out the long-awaited regulations to allow cross-border mergers and amalgamation that could boost foreign direct investment into the country.

The Reserve Bank of India (RBI) has framed the regulations for mergers amalgamation and arrangement between Indian and foreign companies.

The ministry of corporate affairs had already notified Section 234 of the Companies Act, 2013, paving the way for merger and amalgamation of a foreign company with an Indian company and vice-versa.

“The notification of FEMA (Cross Border Merger) Regulations, 2018, is the last leg of legal provisions which is finally came in existence to allow both inbound and outbound mergers of companies in India,” said Manoj Kumar, partner & head – M&A and insolvency resolution services at Corporate Professionals.

“The real beneficiaries of these regulations would be MNCs which in many cases want to consolidate the business of a region and require mergers involving an Indian company with other companies in foreign jurisdictions. The clarity of law also makes corporate planning possible for all Indian business houses having overseas business,” he added.

In the case of inbound merger, the rules allow the resultant company to issue or transfer any security to a person resident outside India subject to pricing and sectoral foreign investment conditions and FEMA rules.

In a case of outbound merger, the rules allow resident Indian entities to acquire or hold securities of the resultant company in accordance with FEMA regulations.

“The valuation of the Indian company and the foreign company shall be done in accordance with Rule 25A of the Companies (Compromises, Arrangement or Amalgamation) Rules, 2016,” the regulations issued by the RBI say.

The central bank has stated that any transaction done in compliance with its regulations will be deemed to have its prior approval which will hugely impact the timeliness of cross border M&As.

The rules will allow Indian companies to merge their foreign businesses with their domestic companies while foreign companies will no longer be required to maintain an Indian company after a merger and instead fold it up into a single entity. This is expected to encourage cross-border M&A activity.

The move is likely to have an impact on insolvency and bankruptcy proceedings as well, since it will encourage foreign bidders to consider buying Indian assets.

RBI has stated that the assets can also be held by the Indian company outside India and anything which is not permitted to be acquired or held has to be disposed off within a period of two years from National Company Law Tribunal’s sanction date.

Any borrowing of the foreign company which due to the merger becomes the borrowing of an Indian company must confirm the External Commercial Borrowing Regulations within a period of two years.

a period of two years. This is subject to condition that no remittance or repayment from India will be made within such period and the conditions with respect to end use shall not apply.