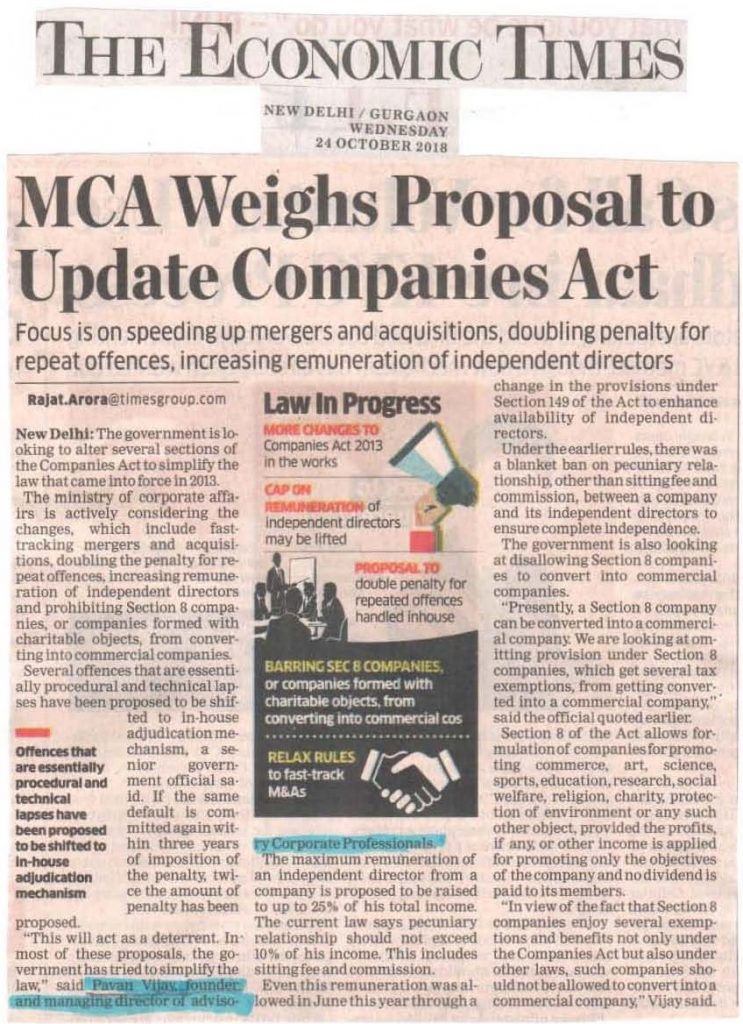 The government is looking to alter several sections of the Companies Act to simplify the law that came into force in 2013.

The ministry of corporate affairs is actively considering the changes, which include fasttracking mergers and acquisitions, doubling the penalty for repeat offences, increasing remuneration of independent directors and prohibiting Section 8 companies, or companies formed with charitable objects, from converting into commercial companies.

Several offences that are essentially procedural and technical lapses have been proposed to be shifted to in-house adjudication mechanism, a senior government official said.

If the same default is committed again within three years of imposition of the penalty, twice the amount of penalty has been proposed.

“This will act as a deterrent. In most of these proposals, the government has tried to simplify the law,” said Pavan Vijay, founder and managing director of advisory Corporate Professionals.

The maximum remuneration of an independent director from a company is proposed to be raised to up to 25% of his total income.

The current law says pecuniary relationship should not exceed 10% of his income. This includes sitting fee and commission.

Even this remuneration was allowed in June this year through a change in the provisions under Section 149 of the Act to enhance availability of independent directors.

Under the earlier rules, there was a blanket ban on pecuniary relationship, other than sitting fee and commission, between a company and its independent directors to ensure complete independence.

The government is also looking at disallowing Section 8 companies to convert into commercial companies.

Section 8 of the Act allows formulation of companies for promoting commerce, art, science, sports, education, research, social welfare, religion, charity, protection of environment or any such other object, provided the profits, if any, or other income is applied for promoting only the objectives of the company and no dividend is paid to its members.

“In view of the fact that Section 8 companies enjoy several exemptions and benefits not only under the Companies Act but also under other laws, such companies should not be allowed to convert into a commercial company,” Vijay said.