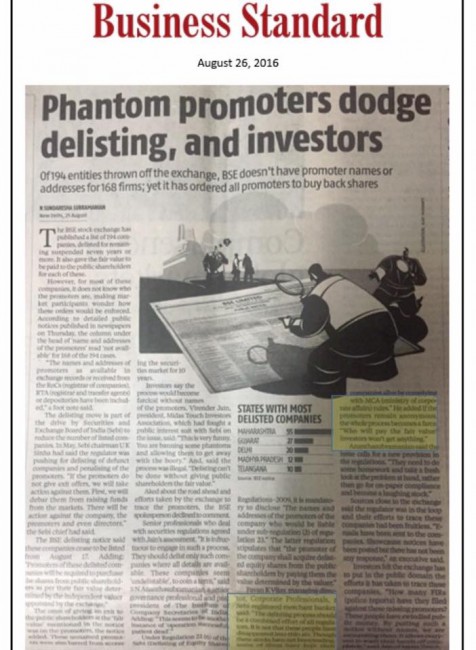 The BSE stock exchange has published a list of 194 companies, delisted for remaining suspended seven years or more. It also gave the fair value to be paid to the public shareholders for each of these.

However, for most of these companies, it does not know who the promoters are, making market participants wonder how these orders would be enforced. According to detailed public notices published in newspapers on Thursday, the column under the head of 'name and addresses of the promoters' read 'not available' for 168 of the 194 cases.

“The names and addresses of promoters as available in exchange records or received from the RoCs (registrar of companies), RTA (registrar and transfer agents) or depositories have been included,” a foot note said.

The delisting move is part of the drive by Securities and Exchange Board of India (Sebi) to reduce the number of listed companies. In May, Sebi chairman U K Sinha had said the regulator was pushing for delisting of defunct companies and penalising of the promoters. “If the promoters do not give exit offers, we will take action against them. First, we will debar them from raising funds from the markets. There will be action against the company, the promoters and even directors,” the Sebi chief had said.

The BSE delisting notice said these companies cease to be listed from August 17. Adding: “Promoters of these delisted companies will be required to purchase the shares from public shareholders as per their fair value determined by the independent valuer appointed by the exchange.”

The onus of giving an exit to the public shareholders at the ‘fair value’ mentioned in the notice was on the promoters, the notice added. These unnamed promoters were also barred from accessing the securities market for 10 years.

Investors say the process would become farcical without names of the promoters. Virender Jain, president, Midas Touch Investors Association, which had fought a public interest suit with Sebi on the issue, said: “This is very funny. You are banning some phantoms and allowing them to get away with the booty.” And, said the process was illegal. “Delisting can’t be done without giving public shareholders the fair value.”

Aked about the road ahead and efforts taken by the exchange to trace the promoters, the BSE spokesperson declined to comment.

Senior professionals who deal with securities regulations agreed with Jain’s assessment. “It is infructuous to engage in such a process. They should delist only such companies where all details are available. These companies seem 'undelistable', to coin a term,” said S N Ananthasubramanian, a senior governance professional and past president of The Institute of Company Secretaries of India. Adding: “This seems to be another instance of 'operation successful; patient dead'.”

Under Regulation 22 (6) of the Sebi (Delisting of Equity Shares) Regulations–2009, it is mandatory to disclose 'The names and addresses of the promoters of the company who would be liable under sub-regulation (3) of regulation 23.” The latter regulation stipulates that “the promoter of the company shall acquire delisted equity shares from the public shareholders by paying them the value determined by the valuer.”

Pavan K Vijay, managing director, Corporate Professionals, a Sebi-registered merchant banker, said: “The delisting process should be a combined effort of all regulators. It is not that these people have disappeared into thin air. Though these stocks have not been trading, some of them have kept their companies alive by complying with MCA (ministry of corporate affairs) rules.” He added if the promoters remain anonymous, the whole process becomes a farce. “Who will pay the fair value? Investors won’t get anything.”

Ananthasubramanian said the issue calls for a new provision in the regulations. “They need to do some homework and take a fresh look at the problem at hand, rather than go for on-paper compliance and become a laughing stock.”

Sources close to the exchange said the regulator was in the loop and their efforts to trace these companies had been fruitless. “Emails have been sent to the companies. Showcause notices have been posted but there has not been any response,” an executive said.

Investors felt the exchange has to put in the public domain the efforts it has taken to trace these companies. “How many FIRs (police reports) have they filed against these missing promoters? These people have swindled public money. By putting such a notice without names, we are exonerating them. It allows everyone to wash their hands off completely,” said Jain of Midas Touch.