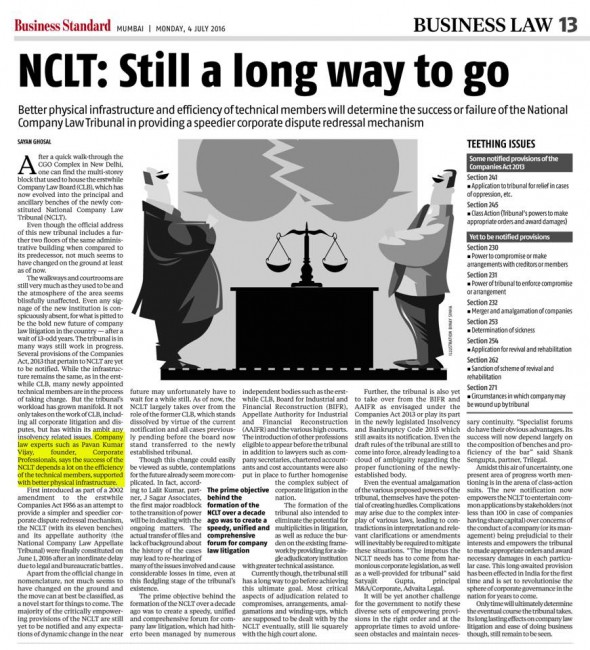 After a quick walk-through the CGO Complex in New Delhi, one can find the multi-storey block that used to house the erstwhile Company Law Board (CLB), which has now evolved into the principal and ancillary benches of the newly constituted National Company Law Tribunal (NCLT).

Even though the official address of this new tribunal includes a further two floors of the same administrative building when compared to its predecessor, not much seems to have changed on the ground at least as of now.

The walkways and courtrooms are still very much as they used to be and the atmosphere of the area seems blissfully unaffected. Even any signage of the new institution is conspicuously absent, for what is pitted to be the bold new future of company law litigation in the country – after a wait of 13-odd years. The tribunal is in many ways still work in progress. Several provisions of the Companies Act, 2013 that pertain to NCLT are yet to be notified. While the infrastructure remains the same, as in the erstwhile CLB, many newly appointed technical members are in the process of taking charge. But the tribunal's workload has grown manifold. It not only takes on the work of CLB, including all corporate litigation and disputes, but has within its ambit any insolvency related issues. Company law experts such as Pavan Kumar Vijay, founder, Corporate Professionals, says the success of the NCLT depends a lot on the efficiency of the technical members, supported with better physical infrastructure.

First introduced as part of a 2002 amendment to the erstwhile Companies Act 1956 as an attempt to provide a simpler and speedier corporate dispute redressal mechanism, the NCLT (with its eleven benches) and its appellate authority (the National Company Law Appellate Tribunal) were finally constituted on June 1, 2016 after an inordinate delay due to legal and bureaucratic battles.

Apart from the official change in nomenclature, not much seems to have changed on the ground and the move can at best be classified, as a novel start for things to come. The majority of the critically empowering provisions of the NCLT are still yet to be notified and any expectations of dynamic change in the near future may unfortunately have to wait for a while still. As of now, the NCLT largely takes over from the role of the former CLB, which stands dissolved by virtue of the current notification and all cases previously pending before the board now stand transferred to the newly established tribunal.

Though this change could easily be viewed as subtle, contemplations for the future already seem more complicated. In fact, according to Lalit Kumar, partner, J Sagar Associates, the first major roadblock to the transition of power will be in dealing with the ongoing matters. The actual transfer of files and lack of background about the history of the cases may lead to re-hearing of many of the issues involved and cause considerable losses in time, even at this fledgling stage of the tribunal's existence.

The prime objective behind the formation of the NCLT over a decade ago was to create a speedy, unified and comprehensive forum for company law litigation, which had hitherto been managed by numerous independent bodies such as the erstwhile CLB, Board for Industrial and Financial Reconstruction (BIFR), Appellate Authority for Industrial and Financial Reconstruction (AAIFR) and the various high courts. The introduction of other professions eligible to appear before the tribunal in addition to lawyers such as company secretaries, chartered accountants and cost accountants were also put in place to further homogenise the complex subject of corporate litigation in the nation.

The formation of the tribunal also intended to eliminate the potential for multiplicities in litigation, as well as reduce the burden on the existing framework by providing for a single adjudicatory institution with greater technical assistance.

Currently though, the tribunal still has a long way to go before achieving this ultimate goal. Most critical aspects of adjudication related to compromises, arrangements, amalgamations and winding-ups, which are supposed to be dealt with by the NCLT eventually, still lie squarely with the high court alone.

Further, the tribunal is also yet to take over from the BIFR and AAIFR as envisaged under the Companies Act 2013 or play its part in the newly legislated Insolvency and Bankruptcy Code 2015 which still awaits its notification. Even the draft rules of the tribunal are still to come into force, already leading to a cloud of ambiguity regarding the proper functioning of the newly- established body.

Even the eventual amalgamation of the various proposed powers of the tribunal, themselves have the potential of creating hurdles. Complications may arise due to the complex interplay of various laws, leading to contradictions in interpretation and relevant clarifications or amendments will inevitably be required to mitigate these situations. "The impetus the NCLT needs has to come from harmonious corporate legislation, as well as a well-provided for tribunal" said Satyajit Gupta, principal M&A/Corporate, Advaita Legal.

It will be yet another challenge for the government to notify these diverse sets of empowering provisions in the right order and at the appropriate times to avoid unforeseen obstacles and maintain necessary continuity. "Specialist forums do have their obvious advantages. Its success will now depend largely on the composition of benches and proficiency of the bar" said Shank Sengupta, partner, Trilegal.

Amidst this air of uncertainty, one present area of progress worth mentioning is in the arena of class-action suits. The new notification now empowers the NCLT to entertain common applications by stakeholders (not less than 100 in case of companies having share capital) over concerns of the conduct of a company (or its management) being prejudicial to their interests and empowers the tribunal to made appropriate orders and award necessary damages in each particular case. This long-awaited provision has been effected in India for the first time and is set to revolutionise the sphere of corporate governance in the nation for years to come.

Only time will ultimately determine the eventual course the tribunal takes. Its long lasting effects on company law litigation and ease of doing business though, still remain to be seen.