Get Ready to pay for information from your company 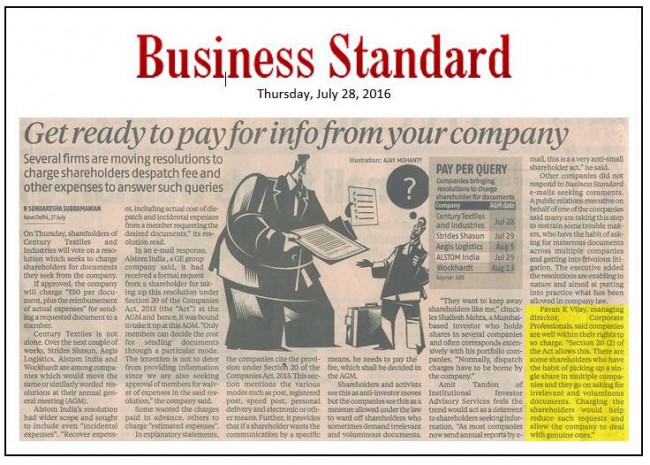 Shareholders of Century Textiles and Industries will vote on a resolution which seeks to charge shareholders for documents they seek from the company.

If approved, the company will charge “~50 per document, plus the reimbursement of actual expenses” for sending a requested document to a member.

Century Textiles is not alone. Over the next couple of weeks, Strides Shasun, Aegis Logistics, Alstom India and Wockhardt are among companies which would move the same or similarly worded resolutions at their annual general meeting (AGM).

In an e-mail response, Alstom India , a GE group company said, it had received a formal request from a shareholder for taking up this resolution under Section 20 of the Companies Act, 2013 (the “Act”) at the AGM and hence, it was bound to take it up at this AGM. “Only members can decide the cost for sending documents through a particular mode. The intention is not to deter from providing information since we are also seeking approval of members for waiver of expenses in the said resolution,” the company said.

Some wanted the charges paid in advance, others to charge “estimated expenses”.

In explanatory statements, the companies cite the provision under Section 20 of the Companies Act, 2013. This section mentions the various modes such as post, registered post, speed post, personal delivery and electronic or other means. Further, it provides that if a shareholder wants the communication by a specific means, he needs to pay the fee, which shall be decided in the AGM.

Shareholders and activists see this as anti-investor moves but the companies see this as a measure allowed under the law to ward off shareholders who sometimes demand irrelevant and voluminous documents.

“They want to keep away shareholders like me,” chuckles Shailesh Mehta, a Mumbaibased investor who holds shares in several companies and often corresponds extensively with his portfolio companies. “Normally, dispatch charges have to be borne by the company.”

Amit Tandon of Institutional Investor Advisory Services feels the trend would act as a deterrent to shareholders seeking information. “As most companies now send annual reports by email, this is a a very anti-small shareholder act,” he said.

Other companies did not respond to Business Standard e-mails seeking comments. A public relations executive on behalf of one of the companies said many are taking this step to restrain some trouble makers, who have the habit of asking for numerous documents across multiple companies and getting into frivolous litigation. The executive added the resolutions are enabling in nature and aimed at putting into practice what has been allowed in company law.

Pavan K Vijay, managing director, Corporate Professionals, said companies are well within their rights to so charge. “Section 20 (2) of the Act allows this. There are some shareholders who have the habit of picking up a single share in multiple companies and they go on asking for irrelevant and voluminous documents. Charging the shareholders would help reduce such requests and allow the company to deal with genuine ones.”