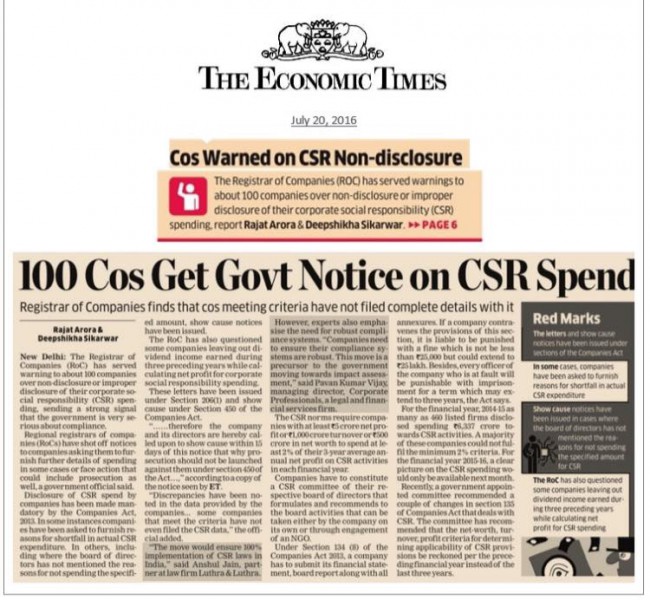 The Registrar of Companies (RoC) has served warning to about 100 companies over non-disclosure or improper disclosure of their corporate social responsibility (CSR) spending, sending a strong signal that the government is very serious about compliance.

Regional registrars of companies (RoCs) have shot off notices to companies asking them to furnish further details of spending in some cases or face action that could include prosecution as well, a government official said.

Disclosure of CSR spend by companies has been made mandatory by the Companies Act, 2013. In some instances companies have been asked to furnish reasons for shortfall in actual CSR expenditure. In others, including where the board of directors has not mentioned the reasons for not spending the specified amount, show cause notices have been issued.

The RoC has also questioned some companies leaving out dividend income earned during three preceding years while calculating net profit for corporate social responsibility spending. These letters have been issued under Section 206(1) and show cause under Section 450 of the Companies Act.

"…therefore the company and its directors are hereby called upon to show cause within 15 days of this notice that why prosecution should not be launched against them under section 450 of the Act…," according to a copy of the notice seen by ET.

"Discrepancies have been noted in the data provided by the companies some companies that meet the criteria have not even filed the CSR data," the official added.

"The move would ensure 100% implementation of CSR laws in India," said Anshul Jain, partner at law firm Luthra & Luthra. However, experts also emphasise the need for robust compliance systems."Companies need to ensure their compliance systems are robust. This move is a precursor to the government moving towards impact assessment," said Pavan Kumar Vijay, managing director, Corporate Professionals, a legal and financial services firm.

The CSR norms require companies with at least Rs 5 crore net profit or Rs 1,000 crore turnover or Rs 500 crore in net worth to spend at least 2 per cent of their 3-year average annual net profit on CSR activities in each financial year.

Companies have to constitute a CSR committee of their respective board of directors that formulates and recommends to the board activities that can be taken either by the company on its own or through engagement of an NGO.

Under Section 134 (8) of the Companies Act 2013, a company has to submit its financial statement, board report along with all annexures. If a company contravenes the provisions of this section, it is liable to be punished with a fine which is not be less than Rs 25,000 but could extend to Rs 25 lakh. Besides, every officer of the company who is at fault will be punishable with imprisonment for a term which may extend to three years, the Act says.

For the financial year, 2014-15 as many as 460 listed firms disclosed spending Rs 6,337 crore towards CSR activities. A majority of these companies could not fulfil the minimum 2 per cent criteria. For the financial year 2015-16, a clear picture on the CSR spending would only be available next month. Recently, a government appointed committee recommended a couple of changes in section 135 of Companies Act that deals with CSR.

The committee has recommended that the net-worth, turnover, profit criteria for determining applicability of CSR provisions be reckoned per the preceding financial year instead of the last three years.