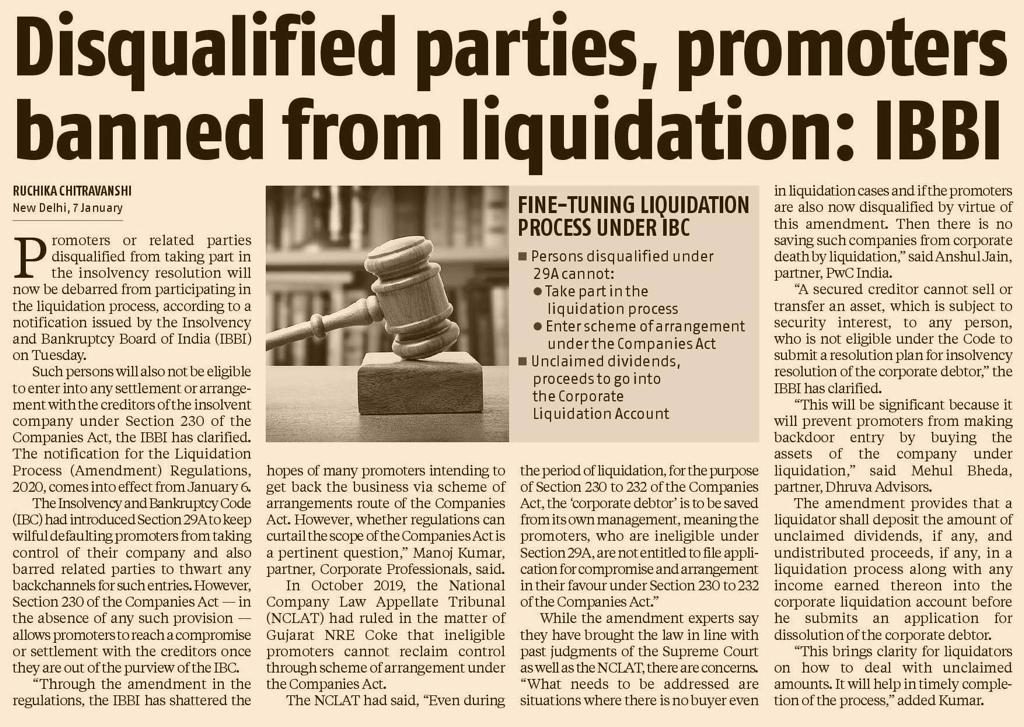 In a significant change in the liquidation framework, the Insolvency and Bankruptcy Board of India (IBBI) has prohibited secured creditors from selling assets of a company to any person restricted from submitting an insolvency resolution plan.

The move will close doors on promoters regaining control of their insolvent firms during liquidation proceedings. The IBBI said it has notified changes to the regulations with effect from January 6. The amendment also provides for a stakeholder to withdraw from the corporate liquidation account.

The IBC provides for time-bound and market-linked resolution process for stressed firms. In case the resolution process does not materialise, then the entity goes for liquidation. Section 230 allows for promoters or any class of creditors to reach an arrangement with other stakeholders to take control of the company once it is sent for liquidation.

Further, a secured creditor cannot sell or transfer an asset, which is subject to security interest, to any person who is not eligible under the code to submit a resolution plan for insolvency resolution of the corporate debtor.

Section 29A of the IBC debars individuals who have defaulted on debt obligations from bidding for stressed assets during the insolvency resolution process.

The amendment allows a secured creditor, who proceeds to realise its security interest, to contribute its share of the insolvency resolution process cost, liquidation process cost and workmen’s dues, within 90 days of the liquidation commencement date, the release said.

Also, the secured creditor has to pay excess of realised value of the asset, which is subject to security interest, over the amount of its claims admitted, within 180 days of the liquidation commencement date. When the secured creditor fails to pay the amount to the liquidator within 90 days or 180 days, as the case may be, the asset should become part of the Liquidation Estate, the release said.

Among others, the amendment provides that a liquidator should deposit the amount of unclaimed dividends and undistributed proceeds in a liquidation process along with any income earned thereon into the corporate liquidation account before an application for dissolution is submitted.

Experts point out that the move is aimed at preventing defaulting promoters from regaining control of their companies at the liquidation stage but that the move may lead to lower recoveries for creditors. “In many cases promoters have tried to get their companies back by proposing scheme of arrangements in the liquidation stage under Section 230 of the Companies Act,” said Manoj Kumar, partner at law firm Corporate Professionals.