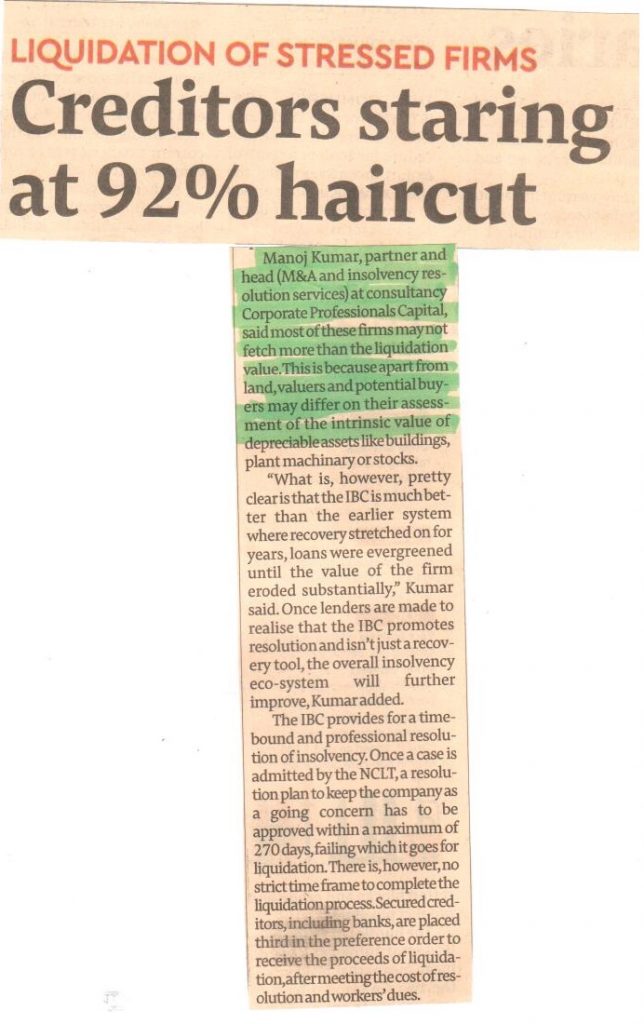 The liquidation value of the 124 companies has been pegged at just Rs 4,817 crore, while the total admitted claims of creditors (both financial and operational) stand at Rs 57,121 crore. The liquidation values of a dozen others were yet to be determined, although the total admitted debt involving all the 136 stressed firms stood at Rs 57,378 crore, showed the IBBI data, based on inputs from resolution professionals.

By contrast, creditors recovered Rs 49,783 crore, or almost 56% of their admitted claims, from 32 stressed companies where insolvency resolution plans were approved by the National Company Law Tribunal (NCLT) by the end of June.

Commenting on liquidation, IBBI chairman MS Sahoo told FE: “The not-so-good results in the initial set of cases is no indication of the performance of the IBC. As and when fresh cases of defaults regularly come up for being admitted, the resolution performance of the IBC will look much more impressive.”

More importantly, Sahoo said, “Going forward, the best use of the IBC will be not to use it at all. The inevitable consequence of a resolution process that a promoter and the management of a corporate debtor vests in a third party, which would bring in behavioural changes, is discouraging the debtors from committing defaults.”

Analysts also termed the massive haircut in old cases unavoidable, given that most of these companies had been stressed for years before the IBC came into being in 2016. So liquidation at scrap value was the only natural outcome. The huge haircut in such cases, however, only reinforces the indispensability of the IBC, they concede. This is because the IBC promotes resolution and gives the chance to lenders to invoke insolvency at the very first default when chances of turning around the stressed firms are much higher, and recovery prospects much better.

Manoj Kumar, partner and head (M&A and insolvency resolution services) at consultancy Corporate Professionals Capital, said most of these firms may not fetch more than the liquidation value. This is because apart from land, valuers and potential buyers may differ on their assessment of the intrinsic value of depreciable assets like buildings, plant machinary or stocks.

“What is, however, pretty clear is that the IBC is much better than the earlier system where recovery stretched on for years, loans were evergreened until the value of the firm eroded substantially,” Kumar said. Once lenders are made to realise that the IBC promotes resolution and isn’t just a recovery tool, the overall insolvency eco-system will further improve, Kumar added.