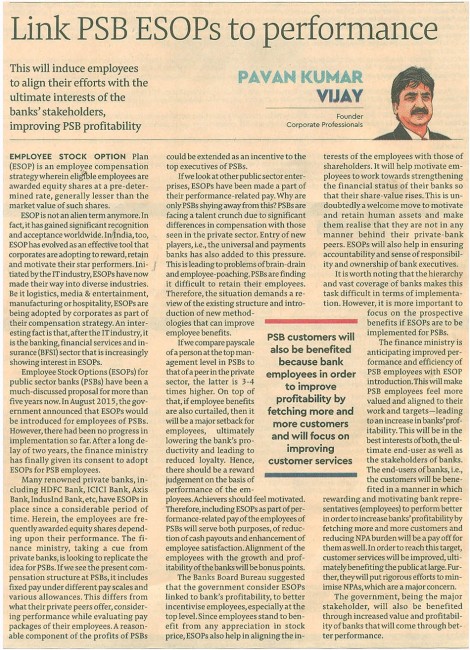 Employee Stock Option Plan (ESOP) is an employee compensation strategy wherein eligible employees are awarded equity shares at a pre-determined rate, generally lesser than the market value of such shares. ESOP is not an alien term anymore. In fact, it has gained significant recognition and acceptance worldwide. In India, too, ESOP has evolved as an effective tool that corporates are adopting to reward, retain and motivate their star performers. Initiated by the IT industry, ESOPs have now made their way into diverse industries. Be it logistics, media & entertainment, manufacturing or hospitality, ESOPs are being adopted by corporates as part of their compensation strategy. An interesting fact is that, after the IT industry, it is the banking, financial services and insurance (BFSI) sector that is increasingly showing interest in ESOPs.

Employee Stock Options (ESOPs) for public sector banks (PSBs) have been a much-discussed proposal for more than five years now. In August 2015, the government announced that ESOPs would be introduced for employees of PSBs. However, there had been no progress in implementation so far. After a long delay of two years, the finance ministry has finally given its consent to adopt ESOPs for PSB employees.

Many renowned private banks, including HDFC Bank, ICICI Bank, Axis Bank, IndusInd Bank, etc, have ESOPs in place since a considerable period of time. Herein, the employees are frequently awarded equity shares depending upon their performance. The finance ministry, taking a cue from private banks, is looking to replicate the idea for PSBs. If we see the present compensation structure at PSBs, it includes fixed pay under different pay scales and various allowances. This differs from what their private peers offer, considering performance while evaluating pay packages of their employees. A reasonable component of the profits of PSBs could be extended as an incentive to the top executives of PSBs.

If we look at other public sector enterprises, ESOPs have been made a part of their performance-related pay. Why are only PSBs shying away from this? PSBs are facing a talent crunch due to significant differences in compensation with those seen in the private sector. Entry of new players, i.e., the universal and payments banks has also added to this pressure. This is leading to problems of brain-drain and employee-poaching. PSBs are finding it difficult to retain their employees. Therefore, the situation demands a review of the existing structure and introduction of new methodologies that can improve employee benefits.

If we compare payscale of a person at the top management level in PSBs to that of a peer in the private sector, the latter is 3-4 times higher. On top of that, if employee benefits are also curtailed, then it will be a major setback for employees, ultimately lowering the bank’s productivity and leading to reduced loyalty. Hence, there should be a reward judgement on the basis of performance of the employees. Achievers should feel motivated. Therefore, including ESOPs as part of performance-related pay of the employees of PSBs will serve both purposes, of reduction of cash payouts and enhancement of employee satisfaction. Alignment of the employees with the growth and profitability of the banks will be bonus points.

The Banks Board Bureau suggested that the government consider ESOPs linked to bank’s profitability, to better incentivise employees, especially at the top level. Since employees stand to benefit from any appreciation in stock price, ESOPs also help in aligning the interests of the employees with those of shareholders. It will help motivate employees to work towards strengthening the financial status of their banks so that their share-value rises. This is undoubtedly a welcome move to motivate and retain human assets and make them realise that they are not in any manner behind their private-bank peers. ESOPs will also help in ensuring accountability and sense of responsibility and ownership of bank executives.

It is worth noting that the hierarchy and vast coverage of banks makes this task difficult in terms of implementation. However, it is more important to focus on the prospective benefits if ESOPs are to be implemented for PSBs.

The finance ministry is anticipating improved performance and efficiency of PSB employees with ESOP introduction. This will make PSB employees feel more valued and aligned to their work and targets—leading to an increase in banks’ profitability. This will be in the best interests of both, the ultimate end-user as well as the stakeholders of banks. The end-users of banks, i.e., the customers will be benefited in a manner in which rewarding and motivating bank representatives (employees) to perform better in order to increase banks’ profitability by fetching more and more customers and reducing NPA burden will be a pay off for them as well. In order to reach this target, customer services will be improved, ultimately benefiting the public at large. Further, they will put rigorous efforts to minimise NPAs, which are a major concern.

The government, being the major stakeholder, will also be benefited through increased value and profitability of banks that will come through better performance.