Insolvency law off to a good start 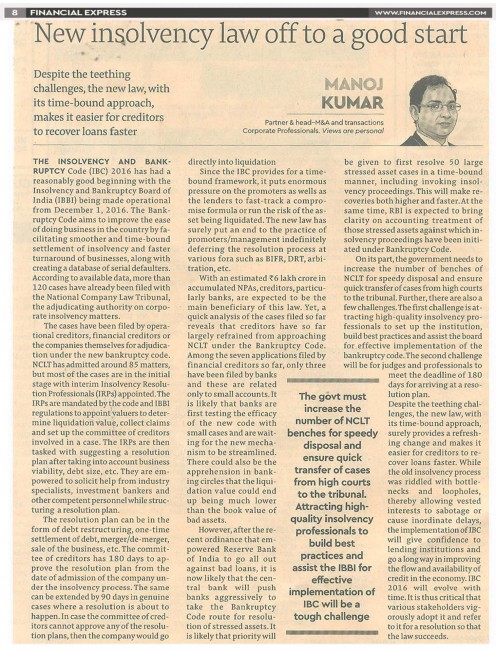 THE INSOLVENCY AND BANK¬RUPTCY Code (IBC) 2016 has had a reasonably good beginning with the Insolvency and Bankruptcy Board of India (IBBI) being made operational from December 1, 2016. The Bank¬ruptcy Code aims to improve the ease of doing business in the country by fa¬cilitating smoother and time-bound settlement of insolvency and faster turnaround of businesses, along with creating a database of serial defaulters. According to available data, more than 120 cases have already been filed with the National Company Law Tribunal, the adjudicating authority on corpo¬rate insolvency matters.

The govt must increase the number of NCLT benches for speedy disposal and ensure quick transfer of cases from high courts to the tribunal. Attracting high- quality insolvency professionals to build best practices and assist the IBBI for effective implementation of IBC will be a tough challenge

The cases have been filed by opera¬tional creditors, financial creditors or the companies themselves for ad judication under the new bankruptcy code. NCLT has admitted around 85 matters, but most of the cases are in the initial stage with interim Insolvency Resolu¬tion Professionals (IRPs) appointed. The IRPs are mandated by the code and IBBI regulations to appoint valuers to deter¬mine liquidation value, collect claims and set up the committee of creditors involved in a case. The IRPs are then tasked with suggesting a resolution plan after taking into account business viability, debt size, etc. They are em¬powered to solicit help from industry specialists, investment bankers and other competent personnel while struc¬turing a resolution plan.

The resolution plan can be in the form of debt restructuring, one-time settlement of debt, merger/de-merger, sale of the business, etc. The commit¬tee of creditors has 180 days to ap¬prove the resolution plan from the date of admission of the company un¬der the insolvency process. The same can be extended by 90 days in genuine cases where a resolution is about to happen. In case the committee of cred¬itors cannot approve any of the resolu¬tion plans, then the company would go directly into liquidation

Since the IBC provides fora time- bound framework, it puts enormous pressure on the promoters as wells as the lenders to fast-track a compro¬mise formula or run the risk of the as¬set being liquidated. The new law has surely put an end to the practice of promoters/management indefinitely deferring the resolution process at various fora such as BIFR, DRT, arbi-tration, etc.

With an estimated ? 6 lakh crore in accumulated NPAs, creditors, particu¬larly banks, are expected to be the main beneficiary of this law. Yet, a quick analysis of the cases filed so far reveals that creditors have so far largely refrained from approaching NCLT under the Bankruptcy Code. Among the seven applications filed by financial creditors so far, only three have been filed by banks and these are related only to small accounts. It is likely that banks are first testing the efficacy of the new code with small cases and are wait¬ing for the new mecha¬nism to be streamlined.

There could also be the apprehension in bank¬ing circles that the liqui¬dation value could end up being much lower than the book value of bad assets.

However, after the re¬cent ordinance that em¬powered Reserve Bank of India to go all out against bad loans, it is now likely that the cen¬tral bank will push banks aggressively to take the Bankruptcy Code route for resolu¬tion of stressed assets. It is likely that priority will be given to first resolve 50 large stressed asset cases in a time-bound manner, including invoking insol¬vency proceedings. This will make re¬coveries both higher and faster. At the same time, RBI is expected to bring clarity on accounting treatment of those stressed assets against which in¬solvency proceedings have been initi¬ated under Bankruptcy Code.

On its part, the government needs to increase the number of benches of NCLT for speedy disposal and ensure quick transfer of cases from high courts to the tribunal. Further, there are also a few challenges. The first challenge is at¬tracting high-quality insolvency pro¬fessionals to set up the institution, build best practices and assist the board for effective implementation of the bankruptcy code. The second challenge will be for judges and professionals to meet the deadline of 180 days for arriving at a reso¬lution plan.

Despite the teething chal¬lenges, the new law, with its time-bound approach, surely provides a refresh¬ing change and makes it easier for creditors to re¬cover loans faster. While the old insolvency process was riddled with bottle¬necks and loopholes, thereby allowing vested interests to sabotage or cause inordinate delays, the implementation of IBC will give confidence to lending institutions and go a long way in improving the flow and availability of credit in the economy. IBC 2016 will evolve with time. It is thus critical that various stakeholders vig¬orously adopt it and refer to it for a resolution so that the law succeeds.