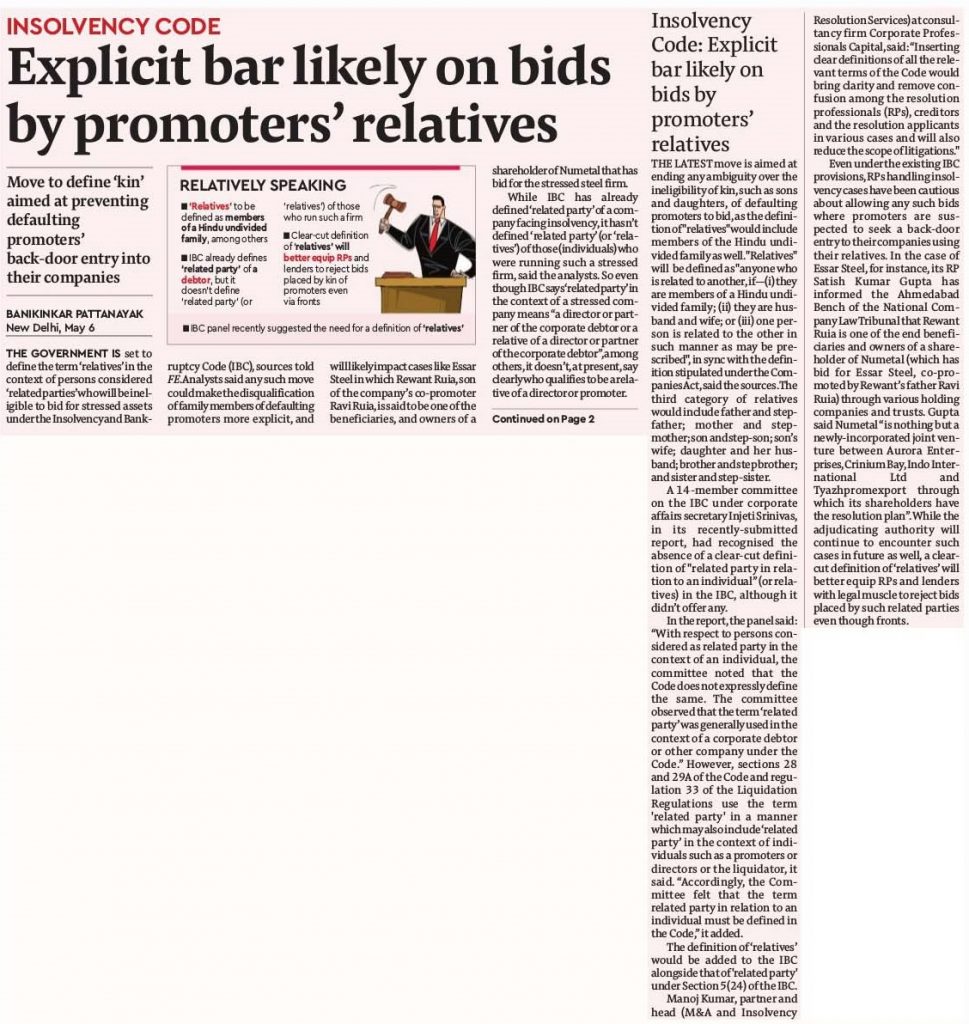 The government is set to define the term ‘relatives’ in the context of persons considered ‘related parties’ who will be ineligible to bid for stressed assets under the Insolvency and Bankruptcy Code (IBC), sources told FE. Analysts said any such move could make the disqualification of family members of defaulting promoters more explicit, and will likely impact cases like Essar Steel in which Rewant Ruia, son of the company’s co-promoter Ravi Ruia, is said to be one of the beneficiaries, and owners of a shareholder of Numetal that has bid for the stressed steel firm.

The latest move is aimed at ending any ambiguity over the ineligibility of kin, such as sons and daughters, of defaulting promoters to bid, as the definition of “relatives” would include members of the Hindu undivided family as well. “Relatives” will be defined as “anyone who is related to another, if—(i) they are members of a Hindu undivided family; (ii) they are husband and wife; or (iii) one person is related to the other in such manner as may be prescribed”, in sync with the definition stipulated under the Companies Act, said the sources. The third category of relatives would include father and step-father; mother and step-mother; son and step-son; son’s wife; daughter and her husband; brother and step brother; and sister and step-sister.

A 14-member committee on the IBC under corporate affairs secretary Injeti Srinivas, in its recently-submitted report, had recognised the absence of a clear-cut definition of “related party in relation to an individual” (or relatives) in the IBC, although it didn’t offer any.

The definition of ‘relatives’ would be added to the IBC alongside that of ‘related party’ under Section 5(24) of the IBC.

Manoj Kumar, partner and head (M&A and Insolvency Resolution Services) at consultancy firm Corporate Professionals Capital, said: “Inserting clear definitions of all the relevant terms of the Code would bring clarity and remove confusion among the resolution professionals (RPs), creditors and the resolution applicants in various cases and will also reduce the scope of litigations.”

Even under the existing IBC provisions, RPs handling insolvency cases have been cautious about allowing any such bids where promoters are suspected to seek a back-door entry to their companies using their relatives. In the case of Essar Steel, for instance, its RP Satish Kumar Gupta has informed the Ahmedabad Bench of the National Company Law Tribunal that Rewant Ruia is one of the end beneficiaries and owners of a shareholder of Numetal (which has bid for Essar Steel, co-promoted by Rewant’s father Ravi Ruia) through various holding companies and trusts. Gupta said Numetal “is nothing but a newly-incorporated joint venture between Aurora Enterprises, Crinium Bay, Indo International Ltd and Tyazhpromexport through which its shareholders have the resolution plan”. While the adjudicating authority will continue to encounter such cases in future as well, a clear-cut definition of ‘relatives’ will better equip RPs and lenders with legal muscle to reject bids placed by such related parties even though fronts.