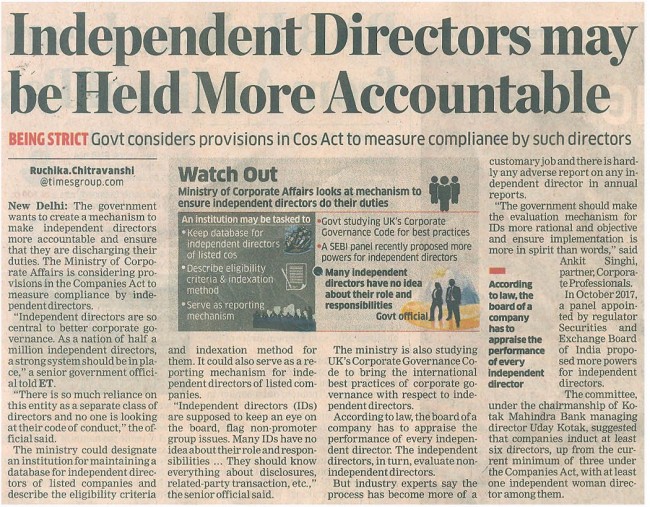 The government wants to create a mechanism to make independent directors more accountable and ensure that they are discharging their duties. The Ministry of Corporate Affairs is considering provisions in the Companies Act to measure compliance by independent directors.

“Independent directors are so central to better corporate governance. As a nation of half a million independent directors, a strong system should be in place,” a senior government official told ET. “There is so much reliance on this entity as a separate class of directors and no one is looking at their code of conduct,” the official said.

“Independent directors (IDs) are supposed to keep an eye on the board, flag non-promoter group issues. Many IDs have no idea about their role and responsibilities … They should know everything about disclosures, related-party transaction, etc.,” the senior official said.

“The government should make the evaluation mechanism for IDs more rational and objective and ensure implementation is more in spirit than words,” said Ankit Singhi, partner, Corporate Professionals. In October 2017, a panel appointed by regulator Securities and Exchange Board of India proposed more powers for independent directors.

The committee, under the chairmanship of Kotak Mahindra Bank managing director Uday Kotak, suggested that companies induct at least six directors, up from the current minimum of three under the Companies Act, with at least one independent woman director among them.