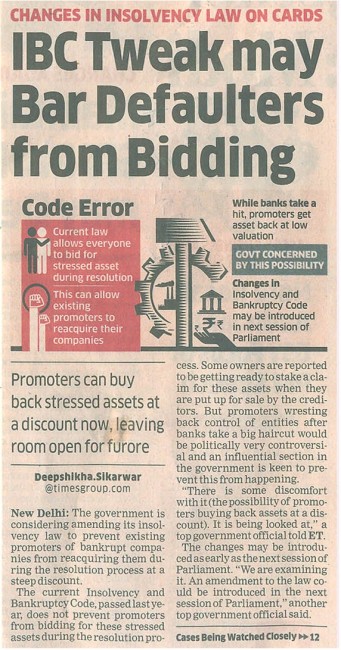 The government is considering amending its insolvency law to prevent existing promoters of bankrupt companies from reacquiring them during the resolution process at a steep discount.

The current Insolvency and Bankruptcy Code, passed last year, does not prevent promoters from bidding for these stressed assets during the resolution process. Some owners are reported to be getting ready to stake a claim for these assets when they are put up for sale by the creditors.

But promoters wresting back control of entities after banks take a big haircut would be politically very controversial and an influential section in the government is keen to prevent this from happening.

“There is some discomfort with it (the possibility of promoters buying back assets at a discount). It is being looked at,” a top government official told ET.

The ministry of corporate affairs is closely looking at the pros and cons of the issue as a number of cases have been taken up for resolution.

“All options are being looked at,” said a MCA official adding that there are differing views. The government is keeping a close watch on the progress in cases that are up for resolution as the IBC is a nascent law.

State Bank of India chief Rajnish Kumar had last week said that legally the existing promoters are “within their rights to participate” in the resolution process.

The Insolvency and Bankruptcy Board of India (IBBI) has recently amended regulations governing corporate insolvency resolution process to ensure that as part of due diligence prior to approval of a resolution, the antecedents, credit worthiness and credibility of a resolution applicant, including promoters, are taken into account by the Committee of Creditors.

But some government officials feel that without legislative backing, banning promoters on the basis of these regulations may not be enough. A government official told ET that there are countries that bar incumbent promoters from participating in the resolution process once they declare bankruptcy, so such a legislative restriction would not be without precedent.

Once the government reaches a final decision on the matter, an amendment could be introduced soon.

The current law allows independent resolution professionals (IRPs) to invite prospective lenders, investors and other interested parties to present resolution proposals, which means that even the corporate debtor undergoing bankruptcy can put forward a plan.

Some IRPs are not in favour of a legislative ban that would impose a blanket ban on promoters.

“Insolvency resolution is a commercial process and hence banks and financial institutions should be allowed to take informed decision taking their best business interest in mind. They should not be compelled to reject the offer of existing promoters merely because under their control the company had defaulted, except where there is an allegation of wilful default or misappropriation of funds,” said Pawan Vijay, founder of Corporate Professionals, an advisory firm that employs insolvency professionals.