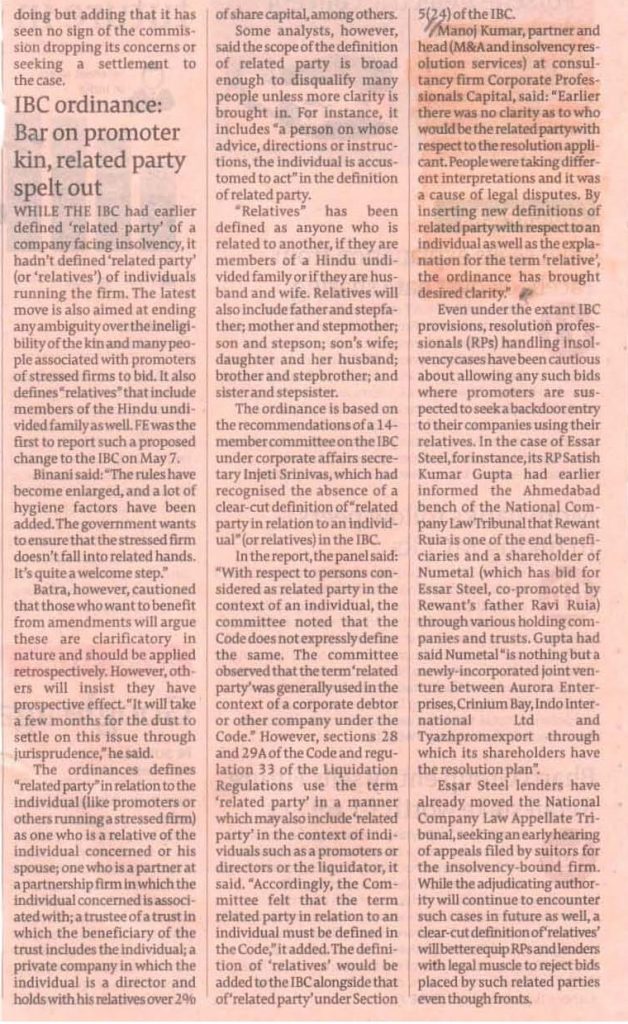 The latest ordinance on the Insolvency and Bankruptcy Code (IBC) has defined “relatives” and “related party” in relation to individuals who have run a stressed firm and will now be barred from bidding for it. Analysts said the move will make the disqualification of family members of defaulting promoters more explicit and could impact cases like Essar Steel in which Rewant Ruia, son of the company’s co-promoter Ravi Ruia, is alleged to be one of the end beneficiaries and a shareholder of Numetal that has bid for the stressed steel firm.

Mamta Binani, former president of the Institute of Company Secretaries of India and the country’s first registered insolvency professional, told FE: “The related party rules will be implemented prospectively and applicable to cases where verdict hasn’t yet been delivered by the adjudicating authority.” The National Company Law Appellate Tribunal is yet to decide on Essar Steel case.

Noted insolvency lawyer Sumant Batra said: “Unless the legislation itself gives a retrospective effect to the amendment, it will have prospective application.” While the IBC had earlier defined ‘related party’ of a company facing insolvency, it hadn’t defined ‘related party’ (or ‘relatives’) of individuals running the firm. The latest move is also aimed at ending any ambiguity over the ineligibility of the kin and many people associated with promoters of stressed firms to bid. It also defines “relatives” that include members of the Hindu undivided family as well. FE was the first to report such a proposed change to the IBC on May 7.

Binani said: “The rules have become enlarged, and a lot of hygiene factors have been added. The government wants to ensure that the stressed firm doesn’t fall into related hands. It’s quite a welcome step.” Batra, however, cautioned that those who want to benefit from amendments will argue these are clarificatory in nature and should be applied retrospectively. However, others will insist they have prospective effect. “It will take a few months for the dust to settle on this issue through jurisprudence,” he said.

“Relatives” has been defined as anyone who is related to another, if they are members of a Hindu undivided family or if they are husband and wife. Relatives will also include father and stepfather; mother and stepmother; son and stepson; son’s wife; daughter and her husband; brother and stepbrother; and sister and stepsister.

The ordinance is based on the recommendations of a 14-member committee on the IBC under corporate affairs secretary Injeti Srinivas, which had recognised the absence of a clear-cut definition of “related party in relation to an individual” (or relatives) in the IBC.

However, sections 28 and 29A of the Code and regulation 33 of the Liquidation Regulations use the term ‘related party’ in a manner which may also include ‘related party’ in the context of individuals such as a promoters or directors or the liquidator, it said.

“Accordingly, the Committee felt that the term related party in relation to an individual must be defined in the Code,” it added. The definition of ‘relatives’ would be added to the IBC alongside that of ‘related party’ under Section 5(24) of the IBC.

Manoj Kumar, partner and head (M&A and insolvency resolution services) at consultancy firm Corporate Professionals Capital, said: “Earlier there was no clarity as to who would be the related party with respect to the resolution applicant. People were taking different interpretations and it was a cause of legal disputes. By inserting new definitions of related party with respect to an individual as well as the explanation for the term ‘relative’, the ordinance has brought desired clarity.”

Even under the extant IBC provisions, resolution professionals (RPs) handling insolvency cases have been cautious about allowing any such bids where promoters are suspected to seek a backdoor entry to their companies using their relatives. In the case of Essar Steel, for instance, its RP Satish Kumar Gupta had earlier informed the Ahmedabad bench of the National Company Law Tribunal that Rewant Ruia is one of the end beneficiaries and a shareholder of Numetal (which has bid for Essar Steel, co-promoted by Rewant’s father Ravi Ruia) through various holding companies and trusts.

Gupta had said Numetal “is nothing but a newly-incorporated joint venture between Aurora Enterprises, Crinium Bay, Indo International Ltd and Tyazhpromexport through which its shareholders have the resolution plan”. Essar Steel lenders have already moved the National Company Law Appellate Tribunal, seeking an early hearing of appeals filed by suitors for the insolvency-bound firm.

While the adjudicating authority will continue to encounter such cases in future as well, a clear-cut definition of ‘relatives’ will better equip RPs and lenders with legal muscle to reject bids placed by such related parties even though fronts.