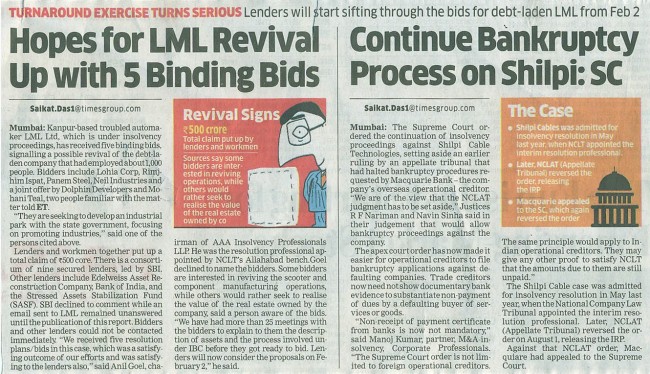 The Supreme Court ordered the continuation of insolvency proceedings against Shilpi Cable Technologies, setting aside an earlier ruling by an appellate tribunal that had halted bankruptcy procedures requested by Macquarie Bank – the company’s overseas operational creditor.

“We are of the view that the NCLAT judgment has to be set aside,” Justices R F Nariman and Navin Sinha said in their judgement that would allow bankruptcy proceedings against the company.

The apex court order has now made it easier for operational creditors to file bankruptcy applications against defaulting companies. Trade creditors now need not show documentary bank evidence to substantiate non-payment of dues by a defaulting buyer of services or goods.

“Non-receipt of payment certificate from banks is now not mandatory,” said Manoj Kumar, partner, M&A-insolvency, Corporate Professionals. “The Supreme Court order is not limited to foreign operational creditors. The same principle would apply to Indian operational creditors. They may give any other proof to satisfy NCLT that the amounts due to them are still unpaid.”

The Shilpi Cables case was admitted for insolvency resolution in May last year, when the National Company Law Tribunal appointed the interim resolution professional. Later, NCLAT (Appellate Tribunal) reversed the order on August 1, releasing the IRP.

Against that NCLAT order, Macquiare had appealed to the Supreme Court.