How govt is dealing with tax evasion, corporate fraud 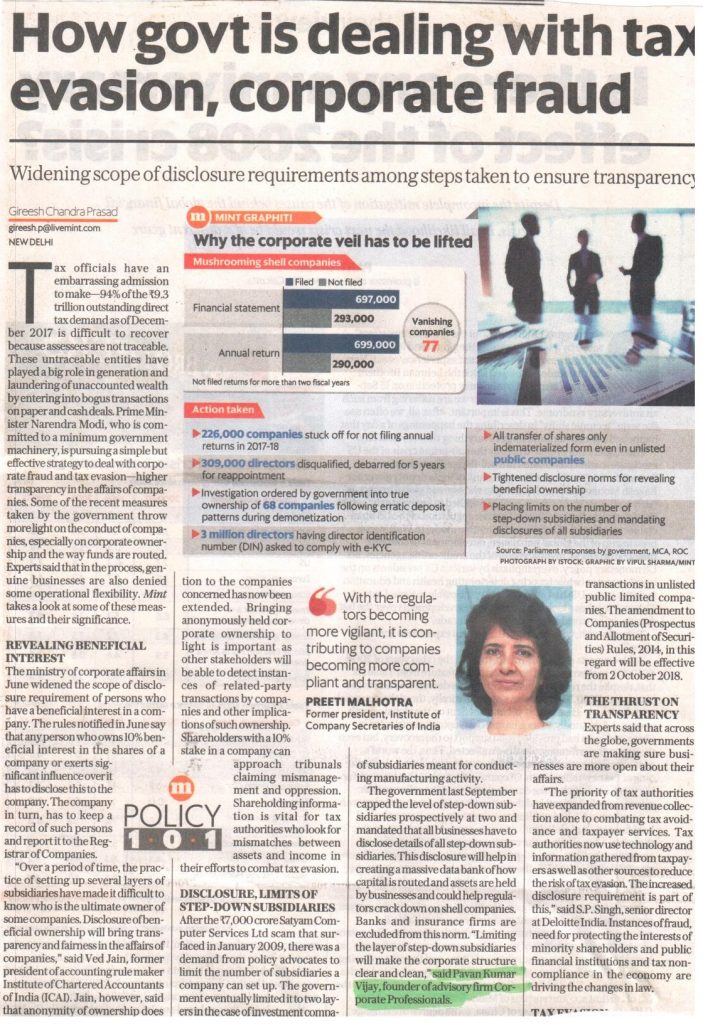 Tax officials have an embarrassing admission to make—94% of the ₹9.3 trillion outstanding direct tax demand as of December 2017 is difficult to recover because assessees are not traceable. These untraceable entities have played a big role in generation and laundering of unaccounted wealth by entering into bogus transactions on paper and cash deals. Prime Minister Narendra Modi, who is committed to a minimum government machinery, is pursuing a simple but effective strategy to deal with corporate fraud and tax evasion—higher transparency in the affairs of companies. Some of the recent measures taken by the government throw more light on the conduct of companies, especially on corporate ownership and the way funds are routed. Experts said that in the process, genuine businesses are also denied some operational flexibility. Mint takes a look at some of these measures and their significance.

The ministry of corporate affairs in June widened the scope of disclosure requirement of persons who have a beneficial interest in a company. The rules notified in June say that any person who owns 10% beneficial interest in the shares of a company or exerts significant influence over it has to disclose this to the company. The company in turn, has to keep a record of such persons and report it to the Registrar of Companies.

“Over a period of time, the practice of setting up several layers of subsidiaries have made it difficult to know who is the ultimate owner of some companies. Disclosure of beneficial ownership will bring transparency and fairness in the affairs of companies,” said Ved Jain, former president of accounting rule maker Institute of Chartered Accountants of India (ICAI). Jain, however, said that anonymity of ownership does not per se imply intent to do wrong. Globally, many businesses do strategic operations like land acquisition through step-down subsidiaries so that the cost does not go up rendering the venture unviable.

The Companies Act mandated disclosure of beneficial ownership of 25% or what is to be specified in rules later. The ministry exercised this flexibility to narrow the threshold to 10% in the rules. The 10 September deadline for persons to file this declaration to the companies concerned has now been extended. Bringing anonymously held corporate ownership to light is important as other stakeholders will be able to detect instances of related-party transactions by companies and other implications of such ownership. Shareholders with a 10% stake in a company can approach tribunals claiming mismanagement and oppression. Shareholding information is vital for tax authorities who look for mismatches between assets and income in their efforts to combat tax evasion.

After the ₹7,000 crore Satyam Computer Services Ltd scam that surfaced in January 2009, there was a demand from policy advocates to limit the number of subsidiaries a company can set up. The government eventually limited it to two layers in the case of investment companies in the Companies Act 2013. But industry observers said some entities have abused the law by routing investments through several layers of subsidiaries meant for conducting manufacturing activity.

The government last September capped the level of step-down subsidiaries prospectively at two and mandated that all businesses have to disclose details of all step-down subsidiaries. This disclosure will help in creating a massive data bank of how capital is routed and assets are held by businesses and could help regulators crack down on shell companies. Banks and insurance firms are excluded from this norm. “Limiting the layer of step-down subsidiaries will make the corporate structure clear and clean,” said Pavan Kumar Vijay, founder of advisory firm Corporate Professionals.