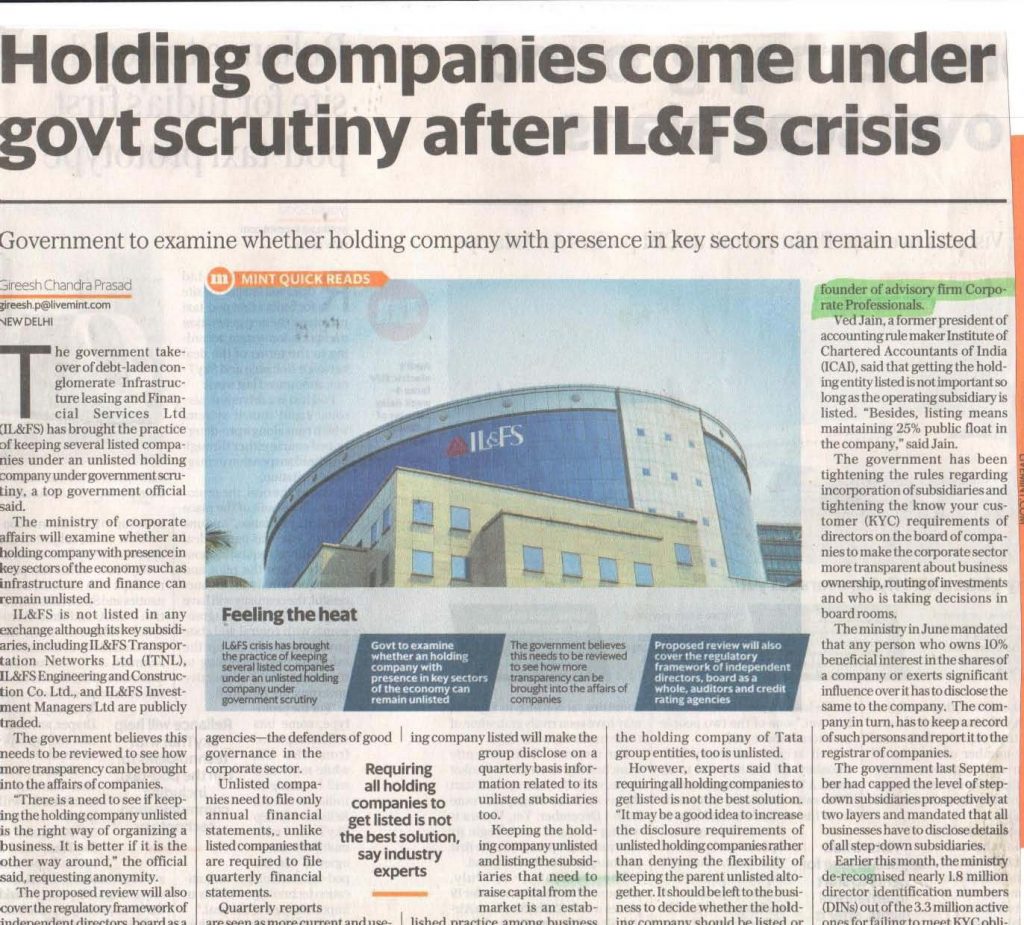 The ministry of corporate affairs will examine whether an holding company with presence in key sectors of the economy such as infrastructure and finance can remain unlisted.

IL&FS is not listed in any exchange although its key subsidiaries, including IL&FS Transportation Networks Ltd (ITNL), IL&FS Engineering and Construction Co. Ltd, and IL&FS Investment Managers Ltd are publicly traded.

The government believes this needs to be reviewed to see how more transparency can be brought into the affairs of companies.

“There is a need to see if keeping the holding company unlisted is the right way of organizing a business. It is better if it is the other way around,” the official said, requesting anonymity.

The proposed review will also cover the regulatory framework of independent directors, board as a whole, auditors and credit rating agencies—the defenders of good governance in the corporate sector.

Quarterly reports are seen as more current and useful by investors. Getting the holding company listed will make the group disclose on a quarterly basis information related to its unlisted subsidiaries too.

However, experts said that requiring all holding companies to get listed is not the best solution. “It may be a good idea to increase the disclosure requirements of unlisted holding companies rather than denying the flexibility of keeping the parent unlisted altogether. It should be left to the business to decide whether the holding company should be listed or not,” said Pavan Kumar Vijay, founder of advisory firm Corporate Professionals.

Ved Jain, a former president of accounting rule maker Institute of Chartered Accountants of India (ICAI), said that getting the holding entity listed is not important so long as the operating subsidiary is listed. “Besides, listing means maintaining 25% public float in the company,” said Jain.

The government has been tightening the rules regarding incorporation of subsidiaries and tightening the know your customer (KYC) requirements of directors on the board of companies to make the corporate sector more transparent about business ownership, routing of investments and who is taking decisions in board rooms.

The ministry in June mandated that any person who owns 10% beneficial interest in the shares of a company or exerts significant influence over it has to disclose the same to the company. The company in turn, has to keep a record of such persons and report it to the registrar of companies.

Earlier this month, the ministry de-recognised nearly 1.8 million director identification numbers (DINs) out of the 3.3 million active ones for failing to meet KYC obligations.