Govt frames rules for valuation of unlisted firms, method yet to be decided 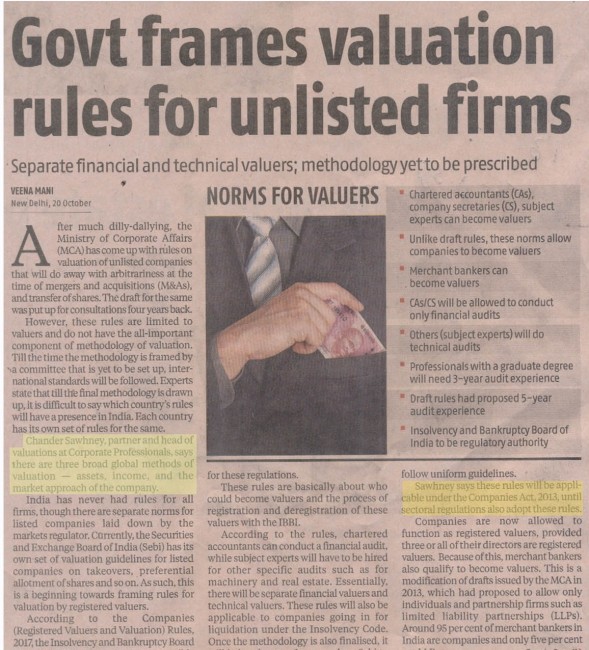 After much dilly-dallying, the Ministry of Corporate Affairs (MCA) has come up with rules on valuation of unlisted companies that will do away with arbitrariness at the time of mergers and acquisitions (M&As), and transfer of shares. The draft for the same was put up for consultations four years back.

However, these rules are limited to valuers and do not have the all-important component of methodology of valuation. Till the time the methodology is framed by a committee that is yet to be set up, international standards will be followed. Experts state that till the final methodology is drawn up, it is difficult to say which country’s rules will have a presence in India. Each country has its own set of rules for the same.

Chander Sawhney, partner and head of valuations at Corporate Professionals, says there are three broad global methods of valuation — assets, income, and the market approach of the company.

India has never had rules for all firms, though there are separate norms for listed companies laid down by the markets regulator. Currently, the Securities and Exchange Board of India (Sebi) has its own set of valuation guidelines for listed companies on takeovers, preferential allotment of shares and so on. As such, this is a beginning towards framing rules for valuation by registered valuers.

According to the Companies (Registered Valuers and Valuation) Rules, 2017, the Insolvency and Bankruptcy Board of India (IBBI) is the authority responsible for these regulations.

These rules are basically about who could become valuers and the process of registration and deregistration of these valuers with the IBBI.

According to the rules, chartered accountants can conduct a financial audit, while subject experts will have to be hired for other specific audits such as for machinery and real estate. Essentially, there will be separate financial valuers and technical valuers. These rules will also be applicable to companies going in for liquidation under the Insolvency Code. Once the methodology is also finalised, it will help other regulators such as Sebi to follow uniform guidelines.

Sawhney says these rules will be applicable under the Companies Act, 2013, until sectoral regulations also adopt these rules.

Companies are now allowed to function as registered valuers, provided three or all of their directors are registered valuers. Because of this, merchant bankers also qualify to become valuers. This is a modification of drafts issued by the MCA in 2013, which had proposed to allow only individuals and partnership firms such as limited liability partnerships (LLPs). Around 95 per cent of merchant bankers in India are companies and only five per cent are LLPs.

Unregistered valuers can continue to work till March 31, 2018.

Experts say these rules will bring in professional discipline among valuers in India and will lead to standardisation in this field.

This move will also make M&As easier, as valuation will be done on the basis of certain guidelines. Before these rules, there was a great deal of subjectivity that was usually challenged, experts had opined. They had also opined that litigation on account of valuation will reduce with the regulations. The rules state that all transactions with third parties undertaken during the period the valuer has been appointed has to be reported to the IBBI.