Govt, board eye asset sales to turn IL&FS around in six months 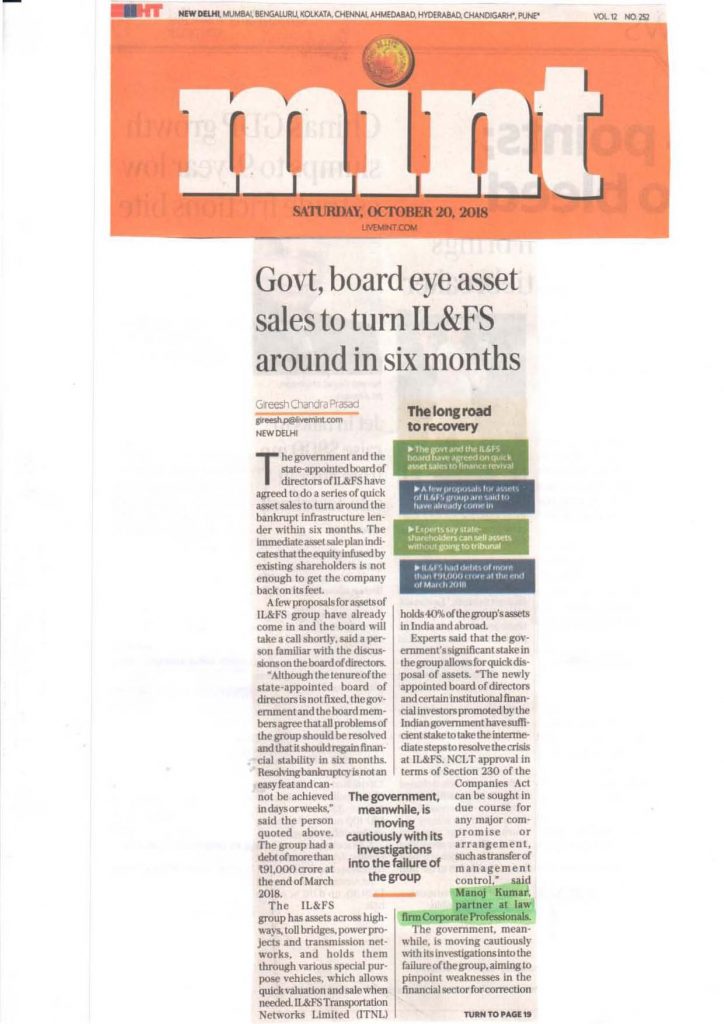 The government and the state-appointed board of directors of IL&FS have agreed to do a series of quick asset sales to turn around the bankrupt infrastructure lender within six months. The immediate asset sale plan indicates that the equity infused by existing shareholders is not enough to get the company back on its feet.

A few proposals for assets of IL&FS group have already come in and the board will take a call shortly, said a person familiar with the discussions on the board of directors.

“Although the tenure of the state-appointed board of directors is not fixed, the government and the board members agree that all problems of the group should be resolved and that it should regain financial stability in six months. Resolving bankruptcy is not an easy feat and cannot be achieved in days or weeks,” said the person quoted above. The group had a debt of more than ₹91,000 crore at the end of March 2018.

The IL&FS group has assets across highways, toll bridges, power projects and transmission networks, and holds them through various special purpose vehicles, which allows quick valuation and sale when needed. IL&FS Transportation Networks Limited (ITNL) holds 40% of the group’s assets in India and abroad.

Experts said that the government’s significant stake in the group allows for quick disposal of assets. “The newly appointed board of directors and certain institutional financial investors promoted by the Indian government have sufficient stake to take the intermediate steps to resolve the crisis at IL&FS. NCLT approval in terms of Section 230 of the Companies Act can be sought in due course for any major compromise or arrangement, such as transfer of management control,” said Manoj Kumar, partner at law firm Corporate Professionals.

The government, meanwhile, is moving cautiously with its investigations into the failure of the group, aiming to pinpoint weaknesses in the financial sector for correction rather than to carry out a witch hunt and alarm the market, something that could put investors on the backfoot and affect liquidity in the system.

Including IL&FS, the financial system is now going through a series of bankruptcy resolutions, the success of which depends on investors coming forward with viable plans and bailing out failed projects. IL&FS’s revival is court monitored, but outside the Insolvency and Bankruptcy Code.

“We cannot spread an atmosphere of distress. It (resolving IL&FS bankruptcy) is a huge task. If you make a wrong move, you are jeopardizing the outcome. There has to be a strategy,” said a government official, who asked not to be named. This does not mean that regulators will go soft in their task, the official said. “The Serious Fraud Investigation Office (SFIO) and other agencies will not be trigger happy. They will do their work professionally,” the official said.

The government earlier this month superseded the board of directors of IL&FS and said an SFIO probe was on into the management failure in the company.

“It has become more than evident that the company has been mismanaged. Now the issue is whether it has been mismanaged with a mala fide intent, knowing the outcome, or is it negligence or something else. We have to identify the nature of mismanagement, and then figure out how accountability is built into the governance structure,” said the second official quoted above.