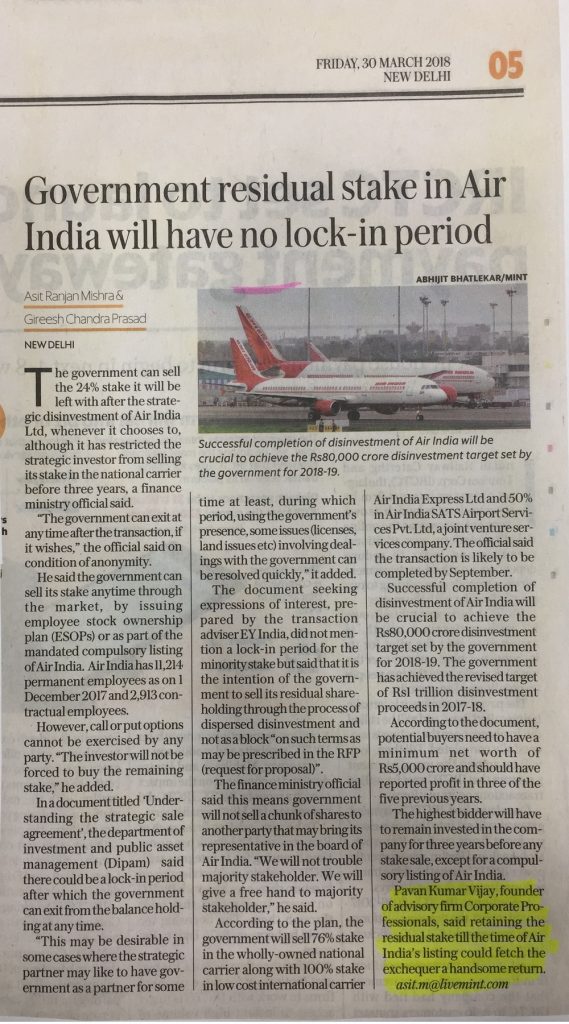 The government can sell the 24% stake it will be left with after the Air India sale, whenever it chooses to, although it has restricted the strategic investor from selling its stake in the national carrier before three years, a finance ministry official said.

“The government can exit at any time after the transaction, if it wishes,” the official said on condition of anonymity.

He said the government can sell its stake anytime through the market, by issuing employee stock ownership plan (ESOPs) or as part of the mandated compulsory listing of Air India. Air India has 11,214 permanent employees as on 1 December 2017 and 2,913 contractual employees.

However, call or put options cannot be exercised by any party. “The investor will not be forced to buy the remaining stake,” he added.

In a document titled ‘Understanding the strategic sale agreement’, the department of investment and public asset management (Dipam) said there could be a lock-in period after which the government can exit from the balance holding at any time.

“This may be desirable in some cases where the strategic partner may like to have government as a partner for some time at least, during which period, using the government’s presence, some issues (licenses, land issues etc) involving dealings with the government can be resolved quickly,” it added.

The document seeking expressions of interest, prepared by the transaction adviser EY India, did not mention a lock-in period for the minority stake but said that it is the intention of the government to sell its residual shareholding through the process of dispersed disinvestment and not as a block “on such terms as may be prescribed in the RFP (request for proposal)”.

According to the plan, the government will sell 76% stake in the wholly-owned national carrier along with 100% stake in low cost international carrier Air India Express Ltd and 50% in Air India SATS Airport Services Pvt. Ltd, a joint venture services company.

The official said the transaction is likely to be completed by September this year.

According to the document, potential buyers need to have a minimum net worth of Rs5,000 crore and should have reported profit in three of the five previous years.

The highest bidder will have to remain invested in the company for three years before any stake sale, except for a compulsory listing of Air India.