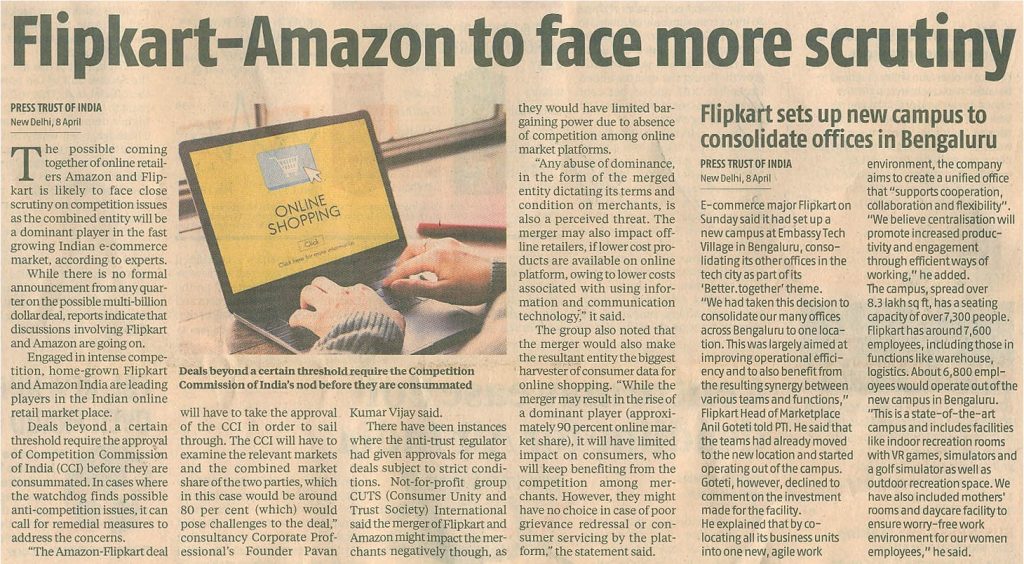 The possible coming together of online retailers Amazon and Flipkart is likely to face close scrutiny on competition issues as the combined entity will be a dominant player in the fast-growing Indian e-commerce market, according to experts.

While there is no formal announcement from any quarter on the possible multi-billion dollar deal, reports indicate that discussions involving Flipkart and Amazon are going on.

Deals beyond a certain threshold require the approval of Competition Commission of India (CCI) before they are consummated. In cases where the watchdog finds possible anti-competition issues, it can call for remedial measures to address the concerns.

“The Amazon Flipkart deal will have to take the approval of CCI in order to sail through. CCI will have to examine the relevant markets and the combined market share of the two parties, which in this case would be around 80 per cent (which) would pose challenges to the deal,” consultancy Corporate Professional’s Founder Pavan Kumar Vijay said.

There have been instances where the anti-trust regulator had given approvals for mega deals subject to strict conditions.

Not-for-profit group CUTS (Consumer Unity and Trust Society) International said the merger of Flipkart and Amazon might impact the merchants negatively though, as they would have limited bargaining power due to the absence of competition among online market platforms.

“Any abuse of dominance, in the form of the merged entity dictating its terms and condition on merchants, is also a perceived threat. The merger may also impact offline retailers, if lower cost products are available on online platform, owing to lower costs associated with using information and communication technology,” it said in a statement.

The group also noted that the merger would also make the resultant entity the biggest harvester of consumer data for online shopping.

“While the merger may result in the rise of a dominant player (approximately 90 percent online market share), it will have limited impact on consumers, who will keep benefiting from the competition among merchants. However, they might have no choice in case of poor grievance redressal or consumer servicing by the platform,” the statement said.