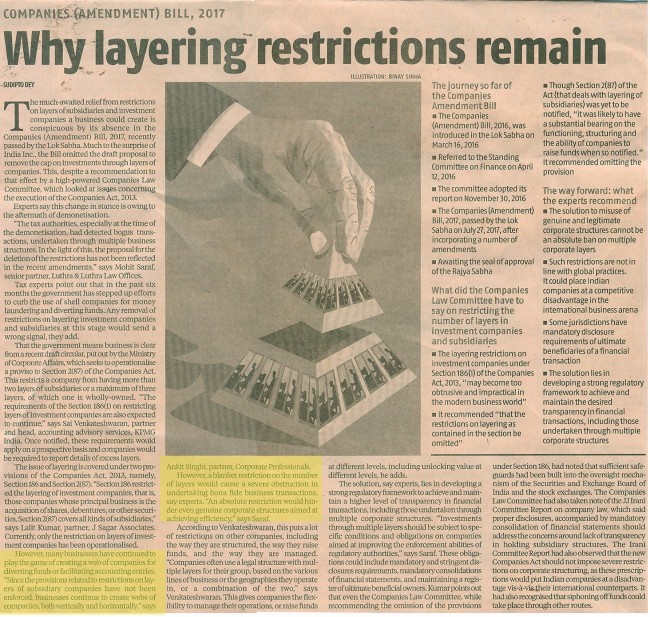 The much-awaited relief from restrictions on layers of subsidiaries and investment companies a business could create is conspicuous by its absence in the Companies (Amendment) Bill, 2017, recently passed by the Lok Sabha. Much to the surprise of India Inc., the Bill omitted the draft proposal to remove the cap on investments through layers of companies. This, despite a recommendation to that effect by a high-powered Companies Law Committee, which looked at issues concerning the execution of the Companies Act, 2013.

Experts say this change in stance is owing to the aftermath of demonetisation.

“The tax authorities, especially at the time of the demonetisation, had detected bogus transactions, undertaken through multiple business structures. In the light of this, the proposal for the deletion of the restrictions has not been reflected in the recent amendments,” says Mohit Saraf, senior partner, Luthra & Luthra Law Offices.

Tax experts point out that in the past six months the government has stepped up efforts to curb the use of shell companies for money laundering and diverting funds. Any removal of restrictions on layering investment companies and subsidiaries at this stage would send a wrong signal, they add.

That the government means business is clear from a recent draft circular, put out by the Ministry of Corporate Affairs, which seeks to operationalise a proviso to Section 2(87) of the Companies Act. This restricts a company from having more than two layers of subsidiaries or a maximum of three layers, of which one is wholly-owned. “The requirements of the Section 186(1) on restricting layers of investment companies are also expected to continue,” says Sai Venkateshwaran, partner and head, accounting advisory services, KPMG India. Once notified, these requirements would apply on a prospective basis and companies would be required to report details of excess layers.

The issue of layering is covered under two provisions of the Companies Act, 2013, namely, Section 186 and Section 2(87). “Section 186 restricted the layering of investment companies, that is, those companies whose principal business is the acquisition of shares, debentures, or other securities. Section 2(87) covers all kinds of subsidiaries,” says Lalit Kumar, partner, J Sagar Associates. Currently, only the restriction on layers of investment companies has been operationalised.

However, many businesses have continued to play the game of creating a web of companies for diverting funds or facilitating accounting entries. “Since the provisions related to restrictions on layers of subsidiary companies have not been enforced, businesses continue to create webs of companies, both vertically and horizontally,” says Ankit Singhi, partner, Corporate Professionals.

However, a blanket restriction on the number of layers would cause a severe obstruction in undertaking bona fide business transactions, say experts. “An absolute restriction would hinder even genuine corporate structures aimed at achieving efficiency,” says Saraf.

According to Venkateshwaran, this puts a lot of restrictions on other companies, including the way they are structured, the way they raise funds, and the way they are managed. “Companies often use a legal structure with multiple layers for their group, based on the various lines of business or the geographies they operate in, or a combination of the two,” says Venkateshwaran. This gives companies the flexibility to manage their operations, or raise funds at different levels, including unlocking value at different levels, he adds.

The solution, say experts, lies in developing a strong regulatory framework to achieve and maintain a higher level of transparency in financial transactions, including those undertaken through multiple corporate structures. “Investments through multiple layers should be subject to specific conditions and obligations on companies aimed at improving the enforcement abilities of regulatory authorities,” says Saraf. These obligations could include mandatory and stringent disclosures requirements, mandatory consolidations of financial statements, and maintaining a register of ultimate beneficial owners. Kumar points out that even the Companies Law Committee, while recommending the omission of the provisions under Section 186, had noted that sufficient safeguards had been built into the oversight mechanism of the Securities and Exchange Board of India and the stock exchanges. The Companies Law Committee had also taken note of the JJ Irani Committee Report on company law, which said proper disclosures, accompanied by mandatory consolidation of financial statements should address the concerns around lack of transparency in holding subsidiary structures. The Irani Committee Report had also observed that the new Companies Act should not impose severe restrictions on corporate structuring, as these prescriptions would put Indian companies at a disadvantage vis-à-vis their international counterparts. It had also recognised that siphoning off funds could take place through other routes.

The journey so far of the Companies Amendment Bill

The way forward: what the experts recommend