Clarity on shell cos needed 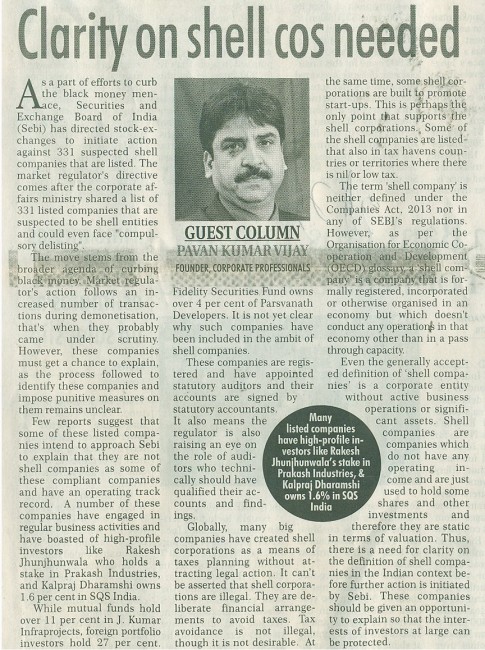 As a part of efforts to curb the black money menace, Securities and Exchange Board of India (Sebi) has directed stock-exchanges to initiate action against 331 suspected shell companies that are listed. The market regulator’s directive comes after the corporate affairs ministry shared a list of 331 listed companies that are suspected to be shell entities and could even face “compulsory delisting”.

The move stems from the broader agenda of curbing black money. Market regulator’s action follows an increased number of transactions during demonetisation, that’s when they probably came under scrutiny. However, these companies must get a chance to explain, as the process followed to identify these companies and impose punitive measures on them remains unclear.

Few reports suggest that some of these listed companies intend to approach Sebi to explain that they are not shell companies as some of these compliant companies and have an operating track record. A number of these companies have engaged in regular business activities and have boasted of high-profile investors like Rakesh Jhunjhunwala who holds a stake in Prakash Industries, and Kalpraj Dharamshi owns 1.6 per cent in SQS India.

While mutual funds hold over 11 per cent in J. Kumar Infraprojects, foreign portfolio investors hold 27 per cent. Fidelity Securities Fund owns over 4 per cent of Parsvanath Developers. It is not yet clear why such companies have been included in the ambit of shell companies.

The term ‘shell company’ is neither defined under the Companies Act, 2013 nor in any of SEBI’s regulations. However, as per the Organisation for Economic Co-operation and Development (OECD) glossary, a ‘shell company’ is a company that is formally registered, incorporated or otherwise organised in an economy but which doesn’t conduct any operations in that economy other than in a pass through capacity.

Even the generally accepted definition of ‘shell companies’ is a corporate entity without active business operations or significant assets. Shell companies are companies which do not have any operating income and are just used to hold some shares and other investments and therefore they are static in terms of valuation. Thus, there is a need for clarity on the definition of shell companies in the Indian context before further action is initiated by Sebi. These companies should be given an opportunity to explain so that the interests of investors at large can be protected