Blanket ban on guarantors of stressed firms may go 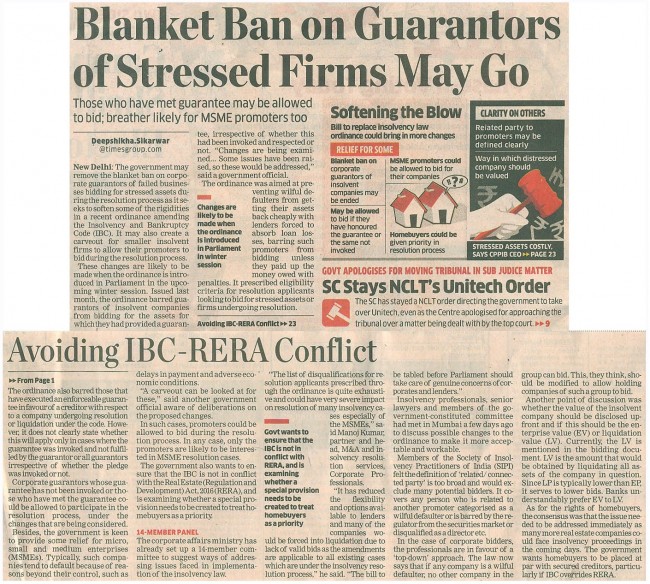 The government may remove the blanket ban on corporate guarantors of failed businesses bidding for stressed assets during the resolution process as it seeks to soften some of the rigidities in a recent ordinance amending the Insolvency and Bankruptcy Code (IBC). It may also create a carveout for smaller insolvent firms to allow their promoters to bid during the resolution process.

These changes are likely to be made when the ordinance is introduced in Parliament in the upcoming winter session. Issued last month, the ordinance barred guarantors of insolvent companies from bidding for the assets for which they had provided a guarantee, irrespective of whether this had been invoked and respected or not. “Changes are being examined… Some issues have been raised, so these would be addressed,” said a government official.

The ordinance was aimed at preventing wilful defaulters from getting their assets back cheaply with lenders forced to absorb loan losses, barring such promoters from bidding unless they paid up the money owed with penalties. It prescribed eligibility criteria for resolution applicants looking to bid for stressed assets or firms undergoing resolution.

The ordinance also barred those that have executed an enforceable guarantee in favour of a creditor with respect to a company undergoing resolution or liquidation under the code. However, it does not clearly state whether this will apply only in cases where the guarantee was invoked and not fulfilled by the guarantor or all guarantors irrespective of whether the pledge was invoked or not.

Corporate guarantors whose guarantee has not been invoked or those who have met the guarantee could be allowed to participate in the resolution process, under the changes that are being considered. Besides, the government is keen to provide some relief for micro, small and medium enterprises (MSMEs). Typically, such companies tend to default because of reasons beyond their control, such as delays in payment and adverse economic conditions.

“A carveout can be looked at for these,” said another government official aware of deliberations on the proposed changes.

In such cases, promoters could be allowed to bid during the resolution process. In any case, only the promoters are likely to be interested in MSME resolution cases.

The government also wants to ensure that the IBC is not in conflict with the Real Estate (Regulation and Development) Act, 2016 (RERA), and is examining whether a special provision needs to be created to treat homebuyers as a priority.

The corporate affairs ministry has already set up a 14-member committee to suggest ways of addressing issues faced in implementation of the insolvency law.

“The list of disqualifications for resolution applicants prescribed through the ordinance is quite exhaustive and could have very severe impact on resolution of many insolvency cases especially of the MSMEs,” said Manoj Kumar, partner and head, M&A and insolvency resolution services, Corporate Professionals.

“It has reduced the flexibility and options available to lenders and many of the companies would be forced into liquidation due to lack of valid bids as the amendments are applicable to all existing cases which are under the insolvency resolution process,” he said. “The bill to be tabled before Parliament should take care of genuine concerns of corporates and lenders.”

Insolvency professionals, senior lawyers and members of the government-constituted committee had met in Mumbai a few days ago to discuss possible changes to the ordinance to make it more acceptable and workable.

Members of the Society of Insolvency Practitioners of India (SIPI) felt the definition of ‘related/ connected party’ is too broad and would exclude many potential bidders. It covers any person who is related to another promoter categorised as a wilful defaulter or is barred by the regulator from the securities market or disqualified as a director etc.

In the case of corporate bidders, the professionals are in favour of a ‘top-down’ approach. The law now says that if any company is a wilful defaulter, no other company in the group can bid. This, they think, should be modified to allow holding companies of such a group to bid.

Another point of discussion was whether the value of the insolvent company should be disclosed upfront and if this should be the enterprise value (EV) or liquidation value (LV). Currently, the LV is mentioned in the bidding document.

LV is the amount that would be obtained by liquidating all assets of the company in question. Since LP is typically lower than EP, it serves to lower bids. Banks understandably prefer EV to LV.

As for the rights of homebuyers, the consensus was that the issue needed to be addressed immediately as many more real estate companies could face insolvency proceedings in the coming days. The government wants homebuyers to be placed at par with secured creditors, particularly if IBC overrides RERA.