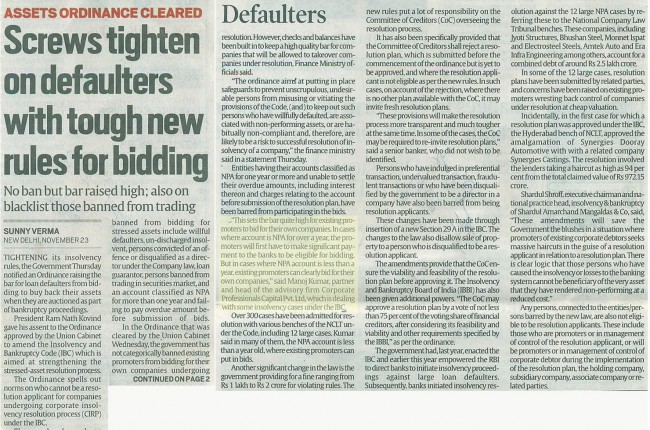 Tightening its insolvency rules, the Government Thursday notified an Ordinance raising the bar for loan defaulters from bidding to buy back their assets when they are auctioned as part of bankruptcy proceedings. President Ram Nath Kovind gave his assent to the Ordinance approved by the Union Cabinet to amend the Insolvency and Bankruptcy Code (IBC) which is aimed at strengthening the stressed-asset resolution process.

The Ordinance spells out norms on who cannot be a resolution applicant for companies undergoing corporate insolvency resolution process (CIRP) under the IBC.

Those who have been banned from bidding for stressed assets include willful defaulters, un-discharged insolvent, persons convicted of an offence or disqualified as a director under the Company law, loan guarantor, persons banned from trading in securities market, and an account classified as NPA for more than one year and failing to pay overdue amount before submission of bids.

In the Ordinance that was cleared by the Union Cabinet Wednesday, the government has not categorically banned existing promoters from bidding for their own companies undergoing resolution. However, checks and balances have been built in to keep a high quality bar for companies that will be allowed to takeover companies under resolution, Finance Ministry officials said.

“The ordinance aims at putting in place safeguards to prevent unscrupulous, undesirable persons from misusing or vitiating the provisions of the Code, (and) to keep out such persons who have willfully defaulted, are associated with non-performing assets, or are habitually non-compliant and, therefore, are likely to be a risk to successful resolution of insolvency of a company,” the finance ministry said in a statement Thursday.

Entities having their accounts classified as NPA for one year or more and unable to settle their overdue amounts, including interest thereon and charges relating to the account before submission of the resolution plan, have been barred from participating in the bids.

“This sets the bar quite high for existing promoters to bid for their own companies. In cases where account is NPA for over a year, the promoters will first have to make significant payment to the banks to be eligible for bidding. But in cases where NPA account is less than a year, existing promoters can clearly bid for their own companies,” said Manoj Kumar, partner and head of the advisory firm Corporate Professionals Capital Pvt. Ltd, which is dealing with some insolvency cases under the IBC.

Over 300 cases have been admitted for resolution with various benches of the NCLT under the Code, including 12 large cases. Kumar said in many of them, the NPA account is less than a year old, where existing promoters can put in bids.

Another significant change in the law is the government providing for a fine ranging from Rs 1 lakh to Rs 2 crore for violating rules. The new rules put a lot of responsibility on the Committee of Creditors (CoC) overseeing the resolution process.

It has also been specifically provided that the Committee of Creditors shall reject a resolution plan, which is submitted before the commencement of the ordinance but is yet to be approved, and where the resolution applicant is not eligible as per the new rules. In such cases, on account of the rejection, where there is no other plan available with the CoC, it may invite fresh resolution plans.

“These provisions will make the resolution process more transparent and much tougher at the same time. In some of the cases, the CoC may be required to re-invite resolution plans,” said a senior banker, who did not wish to be identified.

Persons who have indulged in preferential transaction, undervalued transaction, fraudulent transactions or who have been disqualified by the government to be a director in a company have also been barred from being resolution applicants.

These changes have been made through insertion of a new Section 29 A in the IBC. The changes to the law also disallow sale of property to a person who is disqualified to be a resolution applicant.

The amendments provide that the CoC ensure the viability and feasibility of the resolution plan before approving it. The Insolvency and Bankruptcy Board of India (IBBI) has also been given additional powers. “The CoC may approve a resolution plan by a vote of not less than 75 per cent of the voting share of financial creditors, after considering its feasibility and viability and other requirements specified by the IBBI,” as per the ordinance.

The government had, last year, enacted the IBC and earlier this year empowered the RBI to direct banks to initiate insolvency proceedings against large loan defaulters. Subsequently, banks initiated insolvency resolution against the 12 large NPA cases by referring these to the National Company Law Tribunal benches. These companies, including Jyoti Structures, Bhushan Steel, Monnet Ispat and Electrosteel Steels, Amtek Auto and Era Infra Engineering among others, account for a combined debt of around Rs 2.5 lakh crore.

In some of the 12 large cases, resolution plans have been submitted by related parties, and concerns have been raised on existing promoters wresting back control of companies under resolution at cheap valuation.

Incidentally, in the first case for which a resolution plan was approved under the IBC, the Hyderabad bench of NCLT, approved the amalgamation of Synergies Dooray Automotive with with a related company Synergies Castings. The resolution involved the lenders taking a haircut as high as 94 per cent from the total claimed value of Rs 972.15 crore.

Shardul Shroff, executive chairman and national practice head, insolvency & bankruptcy of Shardul Amarchand Mangaldas & Co, said, “These amendments will save the Government the blushes in a situation where promoters of existing corporate debtors seeks massive haircuts in the guise of a resolution applicant in relation to a resolution plan. There is clear logic that those persons who have caused the insolvency or losses to the banking system cannot be beneficiary of the very asset that they have rendered non-performing at a reduced cost.”