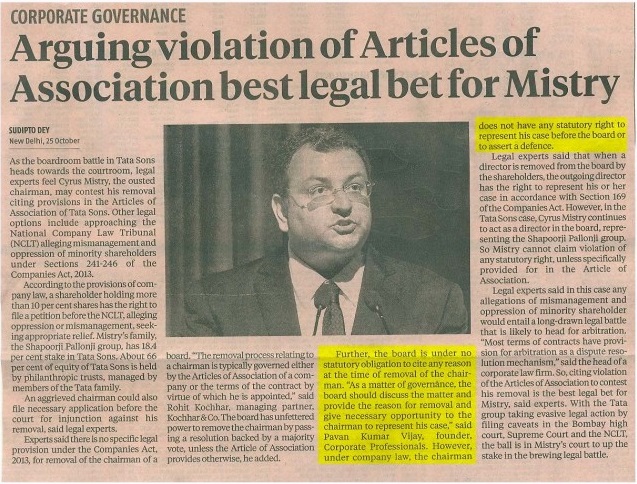 As the boardroom battle in Tata Sons heads towards the courtroom, legal experts feel Cyrus Mistry, the ousted chairman, may contest his removal citing provisions in the Articles of Association of Tata Sons. Other legal options include approaching the National Company Law Tribunal (NCLT) alleging mismanagement and oppression of minority shareholders under Sections 241-246 of the Companies Act, 2013.

According to the provisions of company law, a shareholder holding more than 10 per cent shares has the right to file a petition before the NCLT, alleging oppression or mismanagement, seeking appropriate relief. Mistry’s family, the Shapoorji Pallonji group, has 18.4 per cent stake in Tata Sons. About 66 per cent of equity of Tata Sons is held by philanthropic trusts, managed by members of the Tata family.

An aggrieved chairman could also file necessary application before the court for injunction against his removal, said legal experts.

Experts said there is no specific legal provision under the Companies Act, 2013, for removal of the chairman of a board. “The removal process relating to a chairman is typically governed either by the Articles of Association of a company or the terms of the contract by virtue of which he is appointed,” said Rohit Kochhar, managing partner, Kochhar & Co. The board has unfettered power to remove the chairman by passing a resolution backed by a majority vote, unless the Article of Association provides otherwise, he added.

Further, the board is under no statutory obligation to cite any reason at the time of removal of the chairman. “As a matter of governance, the board should discuss the matter and provide the reason for removal and give necessary opportunity to the chairman to represent his case,” said Pavan Kumar Vijay, founder, Corporate Professionals. However, under company law, the chairman does not have any statutory right to represent his case before the board or to assert a defence.

Legal experts said that when a director is removed from the board by the shareholders, the outgoing director has the right to represent his or her case in accordance with Section 169 of the Companies Act. However, in the Tata Sons case, Cyrus Mistry continues to act as a director in the board, representing the Shapoorji Pallonji group. So Mistry cannot claim violation of any statutory right, unless specifically provided for in the Article of Association.

Legal experts said in this case any allegations of mismanagement and oppression of minority shareholder would entail a long-drawn legal battle that is likely to head for arbitration. “Most terms of contracts have provision for arbitration as a dispute resolution mechanism,” said the head of a corporate law firm. So, citing violation of the Articles of Association to contest his removal is the best legal bet for Mistry, said experts. With the Tata group taking evasive legal action by filing caveats in the Bombay high court, Supreme Court and the NCLT, the ball is in Mistry’s court to up the stake in the brewing legal battle.