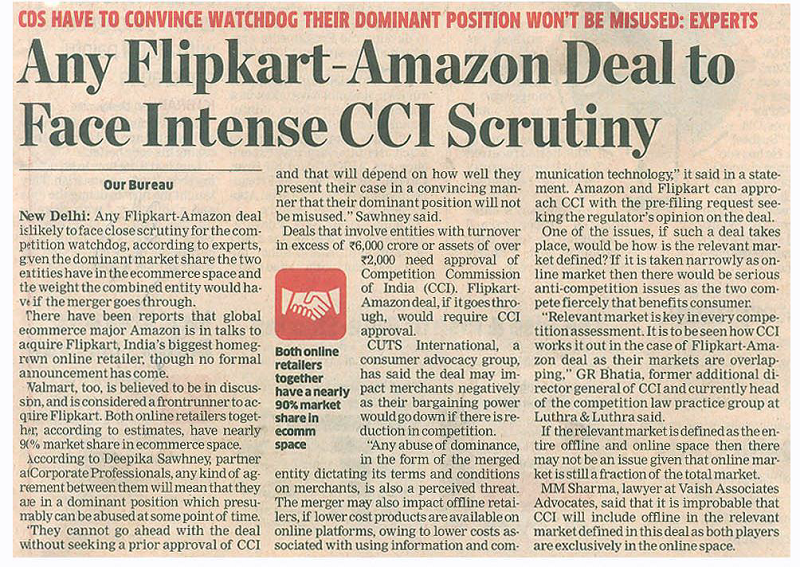 Any Flipkart-Amazon deal is likely to face close scrutiny for the competition watchdog, according to experts, given the dominant market share the two entities have in the ecommerce space and the weight the combined entity would have if the merger goes through.

There have been reports that global ecommerce major Amazon is in talks to acquire Flipkart, India’s biggest homegrown online retailer, though no formal announcement has come.

Walmart, too, is believed to be in discussion, and is considered a frontrunner to acquire Flipkart. Both online retailers together, according to estimates, have nearly 90% market share in ecommerce space.

According to Deepika Sawhney, partner at Corporate Professionals, any kind of agreement between them will mean that they are in a dominant position which presumably can be abused at some point of time. “They cannot go ahead with the deal without seeking a prior approval of CCI and that will depend on how well they present their case in a convincing manner that their dominant position will not be misused.” Sawhney said.

Deals that involve entities with turnover in excess of `6,000 crore or assets of over `2,000 need approval of Competition Commission of India (CCI). Flipkart-Amazon deal, if it goes through, would require CCI approval.

CUTS International, a consumer advocacy group, has said the deal may impact merchants negatively as their bargaining power would go down if there is reduction in competition.

“Any abuse of dominance, in the form of the merged entity dictating its terms and conditions on merchants, is also a perceived threat. The merger may also impact offline retailers, if lower cost products are available on online platforms, owing to lower costs associated with using information and communication technology,” it said in a statement.

Amazon and Flipkart can approach CCI with the pre-filing request seeking the regulator’s opinion on the deal. One of the issues, if such a deal takes place, would be how is the relevant market defined? If it is taken narrowly as online market then there would be serious anti-competition issues as the two compete fiercely that benefits consumer.

“Relevant market is key in every competition assessment. It is to be seen how CCI works it out in the case of Flipkart-Amazon deal as their markets are overlapping,” GR Bhatia, former additional director general of CCI and currently head of the competition law practice group at Luthra & Luthra said.

If the relevant market is defined as the entire offline and online space then there may not be an issue given that online market is still a fraction of the total market. MM Sharma, lawyer at Vaish Associates Advocates, said that it is improbable that CCI will include offline in the relevant market defined in this deal as both players are exclusively in the online space.