For NCLT, it is a race against time for resolution of NPAs 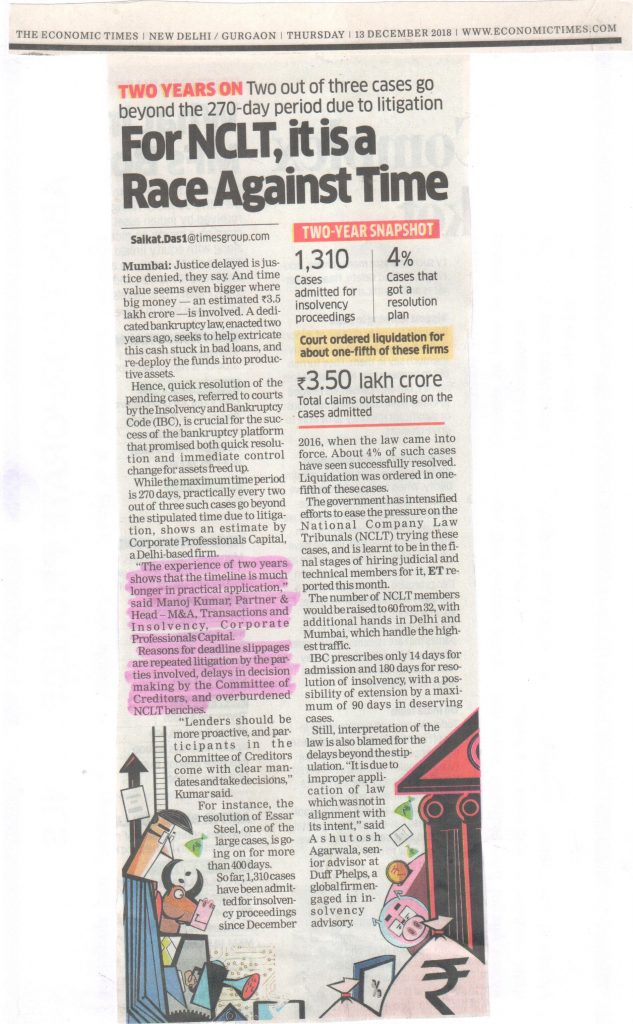 Justice delayed is justice denied, they say. And time value seems even bigger where big money — an estimated Rs 3.5 lakh crore —is involved. A dedicated bankruptcy law, enacted two years ago, seeks to help extricate this cash stuck in bad loans, and re-deploy the funds into productive assets.

Hence, quick resolution of the pending cases, referred to courts by the Insolvency and Bankruptcy Code (IBC), is crucial for the success of the bankruptcy platform that promised both quick resolution and immediate control change for assets freed up.

While the maximum time period is 270 days, practically every two out of three such cases go beyond the stipulated time due to litigation, shows an estimate by Corporate Professionals Capital, a Delhi-based firm.

Reasons for deadline slippages are repeated litigation by the parties involved, delays in decision making by the Committee of Creditors, and overburdened NCLT benches.

“Lenders should be more proactive, and participants in the Committee of Creditors come with clear mandates and take decisions,” Kumar said.

For instance, the resolution of Essar Steel, one of the large cases, is going on for more than 400 days.

So far, 1,310 cases have been admitted for insolvency proceedings since December 2016, when the law came into force. About 4% of such cases have seen successfully resolved. Liquidation was ordered in one-fifth of these cases.

The government has intensified efforts to ease the pressure on the National Company Law Tribunals (NCLT) trying these cases, and is learnt to be in the final stages of hiring judicial and technical members for it, ET reported this month.

The number of NCLT members would be raised to 60 from 32, with additional hands in Delhi and Mumbai, which handle the highest traffic.

IBC prescribes only 14 days for admission and 180 days for resolution of insolvency, with a possibility of extension by a maximum of 90 days in deserving cases.

Still, interpretation of the law is also blamed for the delays beyond the stipulation. “It is due to improper application of law which was not in alignment with its intent,” said Ashutosh Agarwala, senior advisor at Duff Phelps, a global firm engaged in insolvency advisory.