Well within the law 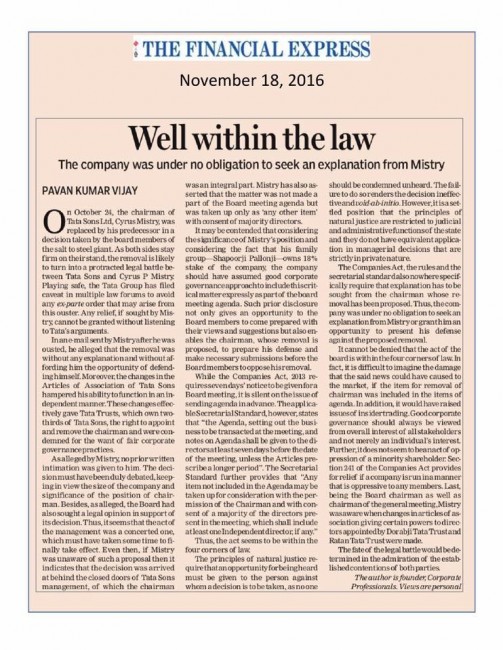 On October 24, the chairman of Tata Sons Ltd, Cyrus Mistry, was replaced by his predecessor in a decision taken by the board members of the salt to steel giant. As both sides stay firm on their stand, the removal is likely to turn into a protracted legal battle between Tata Sons and Cyrus P Mistry. Playing safe, the Tata Group has filed caveat in multiple law forums to avoid any ex-parte order that may arise from this ouster. Any relief, if sought by Mistry, cannot be granted without listening to Tata’s arguments.

In an e-mail sent by Mistry after he was ousted, he alleged that the removal was without any explanation and without affording him the opportunity of defending himself. Moreover, the changes in the Articles of Association of Tata Sons hampered his ability to function in an independent manner. These changes effectively gave Tata Trusts, which own two-thirds of Tata Sons, the right to appoint and remove the chairman and were condemned for the want of fair corporate governance practices.

As alleged by Mistry, no prior written intimation was given to him. The decision must have been duly debated, keeping in view the size of the company and significance of the position of chairman. Besides, as alleged, the Board had also sought a legal opinion in support of its decision. Thus, it seems that the act of the management was a concerted one, which must have taken some time to finally take effect. Even then, if Mistry was unaware of such a proposal then it indicates that the decision was arrived at behind the closed doors of Tata Sons management, of which the chairman was an integral part. Mistry has also asserted that the matter was not made a part of the Board meeting agenda but was taken up only as ‘any other item’ with consent of majority directors.

It may be contended that considering the significance of Mistry’s position and considering the fact that his family group—Shapoorji Pallonji—owns 18% stake of the company, the company should have assumed good corporate governance approach to include this critical matter expressly as part of the board meeting agenda. Such prior disclosure not only gives an opportunity to the Board members to come prepared with their views and suggestions but also enables the chairman, whose removal is proposed, to prepare his defense and make necessary submissions before the Board members to oppose his removal.

While the Companies Act, 2013 requires seven days’ notice to be given for a Board meeting, it is silent on the issue of sending agenda in advance. The applicable Secretarial Standard, however, states that “the Agenda, setting out the business to be transacted at the meeting, and notes on Agenda shall be given to the directors at least seven days before the date of the meeting, unless the Articles prescribe a longer period”. The Secretarial Standard further provides that “Any item not included in the Agenda may be taken up for consideration with the permission of the Chairman and with consent of a majority of the directors present in the meeting, which shall include at least one Independent director, if any.” Thus, the act seems to be within the four corners of law.

The principles of natural justice require that an opportunity for being heard must be given to the person against whom a decision is to be taken, as no one should be condemned unheard. The failure to do so renders the decision ineffective and void-ab-initio. However, it is a settled position that the principles of natural justice are restricted to judicial and administrative functions of the state and they do not have equivalent application in managerial decisions that are strictly in private nature.

The Companies Act, the rules and the secretarial standard also nowhere specifically require that explanation has to be sought from the chairman whose removal has been proposed. Thus, the company was under no obligation to seek an explanation from Mistry or grant him an opportunity to present his defense against the proposed removal.

It cannot be denied that the act of the board is within the four corners of law. In fact, it is difficult to imagine the damage that the said news could have caused to the market, if the item for removal of chairman was included in the items of agenda. In addition, it would have raised issues of insider trading. Good corporate governance should always be viewed from overall interest of all stakeholders and not merely an individual’s interest. Further, it does not seem to be an act of oppression of a minority shareholder. Section 241 of the Companies Act provides for relief if a company is run in a manner that is oppressive to any members. Last, being the Board chairman as well as chairman of the general meeting, Mistry was aware when changes in articles of association giving certain powers to directors app
ointed by Dorabji Tata Trust and Ratan Tata Trust were made.

The fate of the legal battle would be determined in the admiration of the established contentions of both parties.

The author is founder, Corporate Professionals.