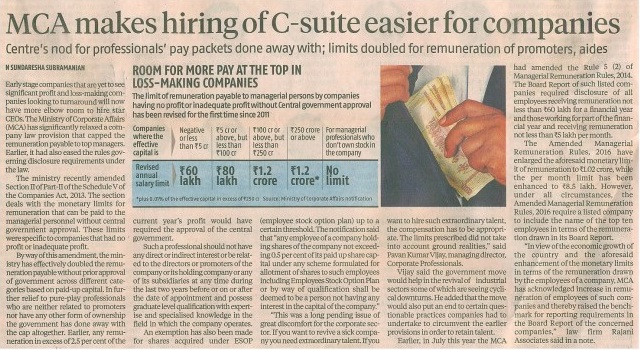 Early stage companies that are yet to see significant profit and loss-making companies looking to turnaround will now have more elbow room to hire star CEOs. The Ministry of Corporate Affairs (MCA) has significantly relaxed a company law provision that capped the remuneration payable to top managers. Earlier, it had also eased the rules governing disclosure requirements under the law.

The ministry recently amended Section II of Part-II of the Schedule V of the Companies Act, 2013. The section deals with the monetary limits for remuneration that can be paid to the managerial personnel without central government approval. These limits were specific to companies that had no profit or inadequate profit.

By way of this amendment, the ministry has effectively doubled the remuneration payable without prior approval of government across different categories based on paid-up capital. In further relief to pure-play professionals who are neither related to promoters nor have any other form of ownership the government has done away with the cap altogether. Earlier, any remuneration in excess of 2.5 per cent of the current year’s profit would have required the approval of the central government.

Such a professional should not have any direct or indirect interest or be related to the directors or promoters of the company or its holding company or any of its subsidiaries at any time during the last two years before or on or after the date of appointment and possess graduate level qualification with expertise and specialised knowledge in the field in which the company operates.

An exemption has also been made for shares acquired under ESOP (employee stock option plan) up to a certain threshold. The notification said that “any employee of a company holding shares of the company not exceeding 0.5 per cent of its paid up share capital under any scheme formulated for allotment of shares to such employees including Employees Stock Option Plan or by way of qualification shall be deemed to be a person not having any interest in the capital of the company.”

Vijay said the government move would help in the revival of industrial sectors some of which are seeing cyclical downturns. He added that the move would also put an end to certain questionable practices companies had to undertake to circumvent the earlier provisions in order to retain talent.

“In view of the economic growth of the country and the aforesaid enhancement of the monetary limits in terms of the remuneration drawn by the employees of a company, MCA has acknowledged increase in remuneration of employees of such companies and thereby raised the benchmark for reporting requirements in the Board Report of the concerned companies,” law firm Rajani Associates said in a note.