Directorship: The numbers game is on again 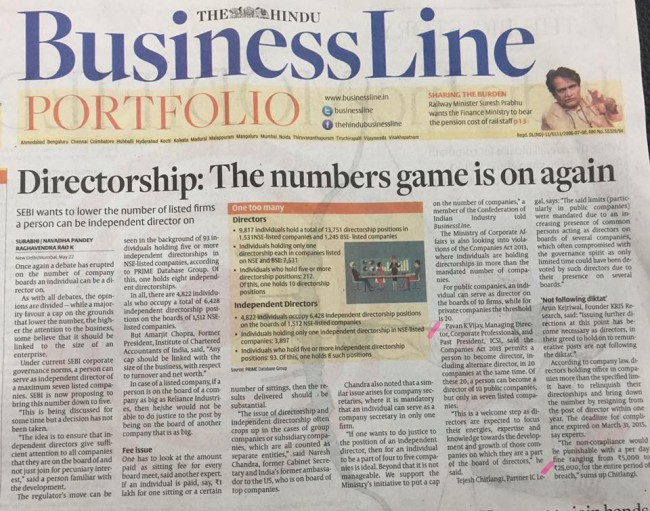 Once again a debate has erupted on the number of company boards an individual can be a director on.

As with all debates, the opinions are divided — while a majority favour a cap on the grounds that lower the number, the higher the attention to the business, some believe that it should be linked to the size of an enterprise.

Under current SEBI corporate governance norms, a person can serve as independent director of a maximum seven listed companies. SEBI is now proposing to bring this number down to five.

“This is being discussed for some time but a decision has not been taken.

“The idea is to ensure that independent directors give sufficient attention to all companies that they are on the board of and not just join for pecuniary interest,” said a person familiar with the development.

In all, there are 4,822 individuals who occupy a total of 6,428 independent directorship positions on the boards of 1,512 NSE-listed companies.

But Amarjit Chopra, Former President, Institute of Chartered Accountants of India, said, “Any cap should be linked with the size of the business, with respect to turnover and net worth.”

In case of a listed company, if a person is on the board of a company as big as Reliance Industries, then he/she would not be able to do justice to the post by being on the board of another company that is as big.

One has to look at the amount paid as sitting fee for every board meet, said another expert. If an individual is paid, say, ?1 lakh for one sitting or a certain number of sittings, then the results delivered should be substantial.

“The issue of directorship and independent directorship often crops up in the cases of group companies or subsidiary companies, which are all counted as separate entities,” said Naresh Chandra, former Cabinet Secretary and India’s former ambassador to the US, who is on board of top companies.

“If one wants to do justice to the position of an independent director, then for an individual to be a part of four to five companies is ideal. Beyond that it is not manageable. We support the Ministry’s initiative to put a cap on the number of companies,” a member of the Confederation of Indian Industry told BusinessLine.

The Ministry of Corporate Affairs is also looking into violations of the Companies Act 2013, where individuals are holding directorships in more than the mandated number of companies.

For public companies, an individual can serve as director on the boards of 10 firms, while for private companies the threshold is 20.

Pavan K Vijay, Managing Director, Corporate Professionals, and Past President, ICSI, said the Companies Act 2013 permits a person to become director, including alternate director, in 20 companies at the same time. Of these 20, a person can become a director of 10 public companies, but only in seven listed companies.

“This is a welcome step as directors are expected to focus their energies, expertise and knowledge towards the development and growth of those companies on which they are a part of the board of directors,” he said.

Tejesh Chitlangi, Partner IC Legal, says: “The said limits (particularly in public companies) were mandated due to an increasing presence of common persons acting as directors on boards of several companies, which often compromised with the governance spirit as only limited time could have been devoted by such directors due to their presence on several boards.”

Arun Kejriwal, Founder KRIS Research, said: “Issuing further directions at this point has become necessary as directors, in their greed to hold on to remunerative posts are not following the diktat.”

According to company law, directors holding office in companies more than the specified limit have to relinquish their directorships and bring down the number by resigning from the post of director within one year. The deadline for compliance expired on March 31, 2015, say experts.

“The non-compliance would be punishable with a per day fine ranging from ?5,000 to ?25,000, for the entire period of breach,” sums up Chitlangi.