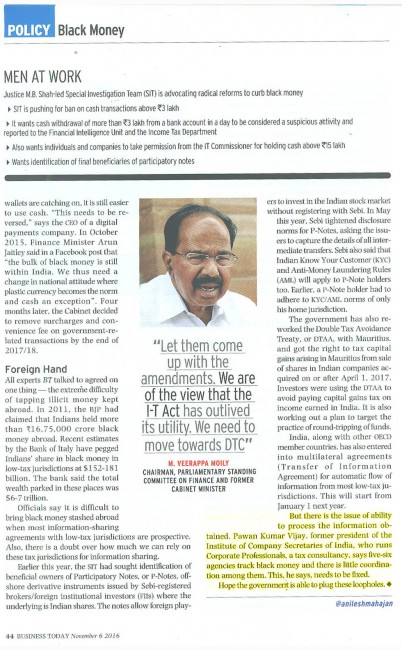 In the 2014 elections, nobody tapped the public mood against corruption as well as Narendra Modi – one of whose promises included bringing black money stashed abroad back to the country and crediting each citizen’s bank account with Rs 15 lakh. After taking over as prime minister, he found that it was easier said than done.

First, in early 2015, Bharatiya Janata Party, or BJP, President Amit Shah said the Rs 15 lakh promise was a chunavi jumla (poll gimmick). Months later, a cornered government came out with a scheme for voluntary disclosure of foreign assets. It attracted just 638 declarations, worth Rs 3,770 crore, much less than the target, and that too mostly by those living abroad. This year, the government came out with another scheme, the Income Disclosure Scheme (IDS) – the 14th since 1951 – for tapping domestic black money. This one fared better with 64,275 declarations amounting to Rs 65,250 crore, yielding a tax revenue of Rs 29,632 crore at 45 per cent rate (30 per cent tax plus 15 per cent penalty). What worked this time were 70,000 letters questioning high-value transactions not linked to Permanent Account Number, or PAN, many involving roadside vendors such as owners of juice centres at Ghatkopar, a vada pav vendor in Thane, a dosa centre in Ghatkopar, a sandwich shop in Andheri and a famous sweet shop owner in South Mumbai. In the last two weeks of the scheme, in Mumbai alone, nearly 700 such small players were either surveyed or issued letters. This was besides lakhs of SMSes informing taxpayers about the scheme, social media campaigns, close to 5,500 awareness meetings in different cities attended by officers and political leaders, the conventional surveys and, lastly, an appeal by Modi himself in his regular radio broadcast Mann Ki Baat. To enable more declarations, the finance ministry also delayed the notification of latest changes to the Benami Transaction (Prohibition) Act that give the government power to confiscate property and impose heavy penalties. “The window allowed many people to come clean on such properties,” says an official involved in implementing the scheme. Revenue officers are already pursuing 1,466 cases involving Rs 50,000 crore indirect tax evasion and undisclosed income of Rs 21,000 crore.

Does the IDS mark a turning point in India’s war against black money, a war in which the NDA government has opened several fronts – right from mandating quoting of PAN for more transactions to tightening of benami property, PMLA and FEMA laws to encouraging use of digital money in place of cash? PMLA is Prevention of Money Laundering Act while FEMA is Foreign Exchange Management Act.

Experts say this is only a start. The government, they say, will have to do a lot more if it wants to be in a position to face voters in 2019. They say disclosure schemes such as the IDS tap a small part of the black economy and that is why the real focus has to be on putting an end to the generation of black money. And this is an area where the government is still to cover any substantial ground. They also point out ethical issues with schemes such as the IDS. “Such schemes are unfair to honest taxpayers and promote tax evasion,” says BJP leader Yashwant Sinha, who was finance minister in the previous NDA government.

Both Sinha and M. Veerappa Moily, who was a minister in the UPA government, say the government has been able to scratch only the surface. Arun Kumar, author of The Black Economy in India and professor of economics at the Jawaharlal Nehru University, says Indians own $2 trillion (Rs 1,32,00,000 crore) black money. R. Vaidyanathan, who teaches finance at IIM-Bangalore, says black money accounts for 6-8 per cent of the country’s economy. He was part of the BJP’s task force on black money along with the present National Security Advisor Ajit Doval, S. Gurumurthy and Mahesh Jethmalani. “Apart from asking people to declare black money, reforms and new legislation should be brought in to close avenues for generation of illicit money,” says Moily.

The big question is – is the government up to the task? “The path the government has followed is correct. But we will have to wait and watch its next step. The next course of action will determine which way the fight against black money goes,” says Sinha.

The next logical step after the IDS is going after the big fish. “Generation of black money happens mostly in India. We can stop a rivulet, but not even an elephant can stop it once it becomes a big river,” says Moily, who chairs the Parliamentary Standing Committee on Finance. He says we must continue efforts to bring back the illicit money kept abroad, but the main focus should be on curbing the generation and flow of black money at home.

Towards this end, the finance ministry this year made PAN mandatory for buying property worth more than Rs 10 lakh (the earlier limit was Rs 5 lakh), any goods/services worth more than Rs 2 lakh, opening term deposits exceeding Rs 50,000 at one go or Rs 5 lakh in a year and investing more than Rs 1 lakh in shares of unlisted companies. There is also a move towards making Aadhaar a must for property transactions to discourage benami deals. Experts say these are the most commonly-used instruments for parking black money. Both FEMA and PMLA have also been amended to enable confiscation of properties in India even if the ill-gotten wealth has been stashed overseas.

But many feel that more can be done. Moily says it is time to do away with the Income Tax (I-T) Act due to scores of exemptions/complications and bring in a simpler direct taxes code or DTC. “We are of the view that the I-T Act has outlived its utility. We need to move towards DTC, with no or very few discretions and exemptions. This will close many avenues for generating black money,” says Moily.

Both Moily and Sinha agree on the need to increase the country’s tax-to-GDP ratio. The 2015/16 Economic Survey said India should move towards the 23 per cent figure; at present, it is at 16.6 per cent, much lower than even the emerging countries’ average of 21 per cent. On October 10, the Parliamentary Standing Committee on Finance started deliberations on this. The discussions centred around taxing rich farmers and professionals such as doctors and lawyers.

The Special Investigation Team, or SIT, on black money, set up under orders from the Supreme Court, has given five sets of recommendations till date. In July this year, it recommended ban on cash transactions above Rs 3 lakh and restricting cash holdings with individuals and companies at Rs 15 lakh. The government is yet to take a call on these suggestions.

One hope of the government is the Goods and Services Tax or GST. As the tax will be levied at the consumer’s end, the credit mechanism – under which one will have to show bills for availing of credit for taxes already paid – will ensure full reporting of transactions and plug indirect tax leakages. “The structure of the new tax, which will replace indirect taxes, will allow authorities to impose tax at the consumption stage. The credit system will encourage consumers to demand bills for every transaction,” says Girish Vanvari, Head of Tax, KPMG India.

Moily agrees the GST will curb black money but adds a word of caution. “It will be beneficial if the tax rates are not exorbitantly high and there is minimum arbitrage (between states),” he says.

One big challenge governments had been facing in their fight against black money was following money trails. Here, technology has been a big help. At present, only 20 per cent of close to $2 trillion transactions a year happen via digital channels such as NEFT, debit/credit cards and digital wallets. Tracking these is easy. That is why a big part of the government’s attempts to curb circulation of black money is aimed at mass adoption of digital payment channels. For this to happen, India will require a world-class digital payments infrastructure, an area where it has made quite a few breakthroughs of late. A few months ago, the National Payments Corporation of India, or NPCIL, launched a low-cost United Payments Interface that will enable people to make everyday payments with a few taps on their smartphones. In 2014, it had announced the launch of RuPay, Indian credit/debit cards whose costs are way less than what global networks such as Visa and Mastercard charge. RuPay debit cards have seen good traction. NPCIL is planning to soon launch credit cards as well.

“Digital transactions have already touched the 50 per cent mark in other BRICS countries. We can easily reach this level provided the government does handholding and reduces or removes the surcharge on digital transactions,”says Naveen Surya, Managing Director, ItzCash, a digital payments company and Chairman of the Payment Council of India, which represents the various regulated non-banking payment industry players.

Surya’s counterparts in the industry say while digital wallets are catching on, it is still easier to use cash. “This needs to be reversed,” says the CEO of a digital payments company. In October 2015, Finance Minister Arun Jaitley said in a Facebook post that “the bulk of black money is still within India. We thus need a change in national attitude where plastic currency becomes the norm and cash an exception”. Four months later, the Cabinet decided to remove surcharges and convenience fee on government-related transactions by the end of 2017/18.

All experts BT talked to agreed on one thing – the extreme difficulty of tapping illicit money kept abroad. In 2011, the BJP had claimed that Indians held more than Rs 16,75,000 crore black money abroad. Recent estimates by the Bank of Italy have pegged Indians’ share in black money in low-tax jurisdictions at $152-181 billion. The bank said the total wealth parked in these places was $6-7 trillion.

Officials say it is difficult to bring black money stashed abroad when most information-sharing agreements with low-tax jurisdictions are prospective. Also, there is a doubt over how much we can rely on these tax jurisdictions for information sharing.

Earlier this year, the SIT had sought identification of beneficial owners of Participatory Notes, or P-Notes, offshore derivative instruments issued by Sebi-registered brokers/foreign institutional investors (FIIs) where the underlying is Indian shares. The notes allow foreign players to invest in the Indian stock market without registering with Sebi. In May this year, Sebi tightened disclosure norms for P-Notes, asking the issuers to capture the details of all intermediate transfers. Sebi also said that Indian Know Your Customer (KYC) and Anti-Money Laundering Rules (AML) will apply to P-Note holders too. Earlier, a P-Note holder had to adhere to KYC/AML norms of only his home jurisdiction.

The government has also reworked the Double Tax Avoidance Treaty, or DTAA, with Mauritius, and got the right to tax capital gains arising in Mauritius from sale of shares in Indian companies acquired on or after April 1, 2017. Investors were using the DTAA to avoid paying capital gains tax on income earned in India. It is also working out a plan to target the practice of round-tripping of funds.

India, along with other OECD member countries, has also entered into multilateral agreements (Transfer of Information Agreement) for automatic flow of information from most low-tax jurisdictions. This will start from January 1 next year.

But there is the issue of ability to process the information obtained. Pawan Kumar Vijay, former president of the Institute of Company Secretaries of India, who runs Corporate Professionals, a tax consultancy, says five-six agencies track black money and there is little coordination among them. This, he says, needs to be fixed.

Hope the government is able to plug these loopholes.